It’s wonderful to learn about female artists and visionaries, but it is especially exciting when you hear about a woman who completely changed the history of the medium you actually work in. Several months ago while visiting the Getty Museum, a cyanotype caught my eye because I had been working with that medium for a short time and was eager to learn more about it. Upon reading the accompanying text, I was ecstatic to see a woman (a rarity in museums in general) as the artist of the 1853 cyanotype. Anna Atkins. Even more, the wall text explained that she was one of the pioneers of the technique. I made a mental note to learn more about her, and I am so excited to finally write about her for Scarlett and Giselle. Anna Atkins was born in 1799 in England and raised by her father, John George Children. Children was a scientist, and when Anna showed an aptitude for drawing, her engravings of shells were included as illustrations in her father’s published works. Anna, too, had a scientific education–something that was, of course, rare for a woman. She collected plants for her botanical studies preserved them by drying them. Her talent for art and her desire to preserve natural artifacts came together when she learned of a newly-invented photographic medium called the cyanotype. The cyanotype process was invented by John Herschel, who also coined and popularized the word “photography.” To create a cyanotype, a surface (usually paper) is treated with light-sensitive chemicals. When an object is laid on top of the treated surface, an outline of the object appears in white because no light is allowed to pass through it, while the surface around the object turns blue when it is exposed to sunlight. Herschel was a family friend of Anna’s and she was able to learn this new process directly from him. 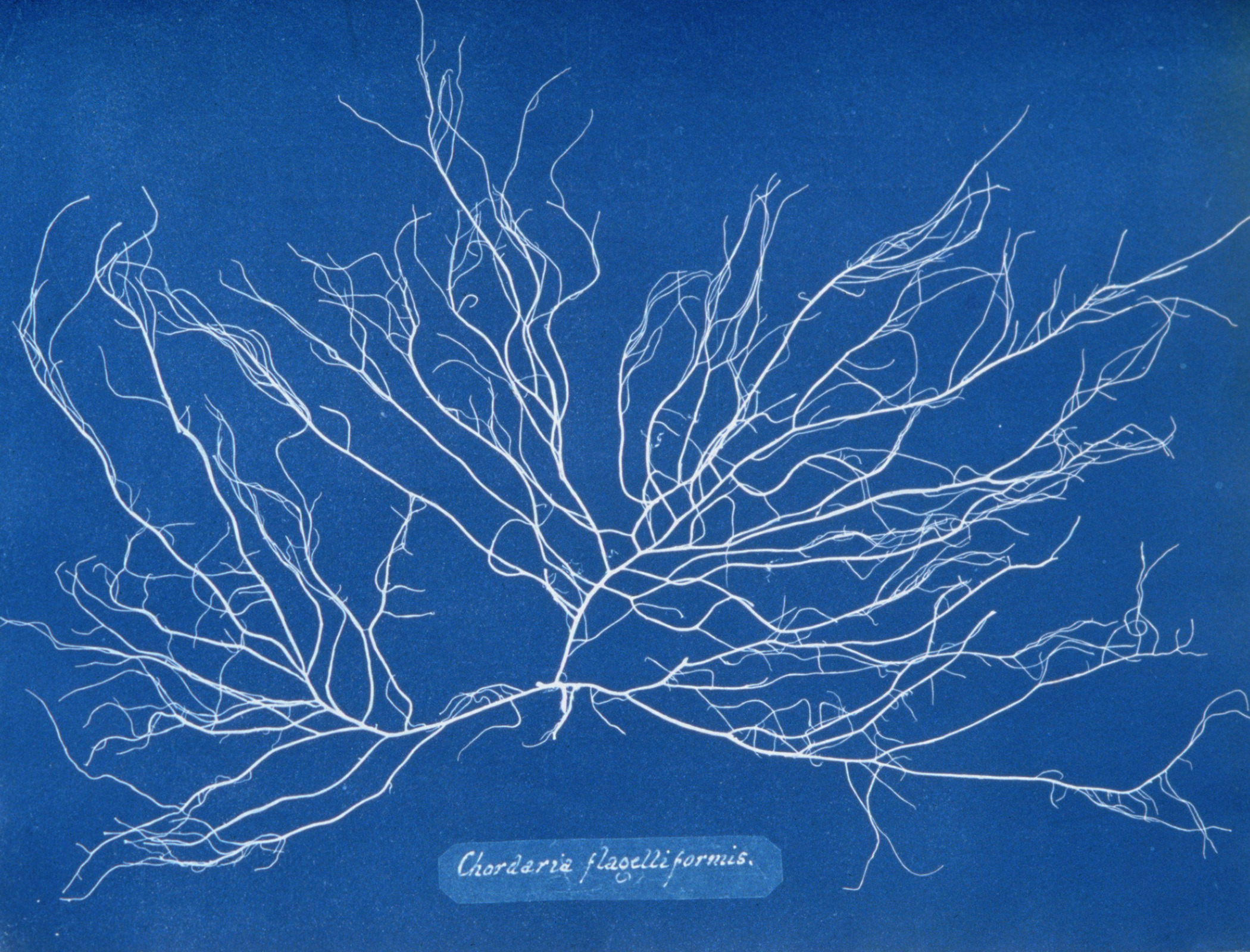 Within a year of its invention, Anna had appropriated the process to help her preserve her botanical samples in a new way. By laying her samples onto the light-sensitive paper, she made an entire collection of over 400 British algae prints, which she turned into the first-ever photo book. For this, she been called the first female photographer. But I mean, how exciting is it that a woman created the first photography book the world had ever seen? Not only that, she shook up the world of scientific illustration. She created the the first completely “accurate” method of visual scientific recordings. Her ingenuity has made a lasting mark (pun intended) on both the artistic and scientific worlds.
I’ve really enjoyed experimenting with the cyanotype process. It’s interesting to learn about the medium’s specific roots in scientific illustration because I am always considering the ways in which photography is viewed as the “truth” or as “accurate.” Especially with a stripped-down form like the cyanotype process that literally functions from direct contact, it can be fun to play with the viewer’s sense of “reality” with this medium. I combined the indexical and the spiritual in one of my own projects, linked here. With a pioneer like Anna Atkins to thank for this process’s existence, I look forward to experimenting with it even more.

From the Studio: Flower Collar