From the Studio: For Anna Atkins 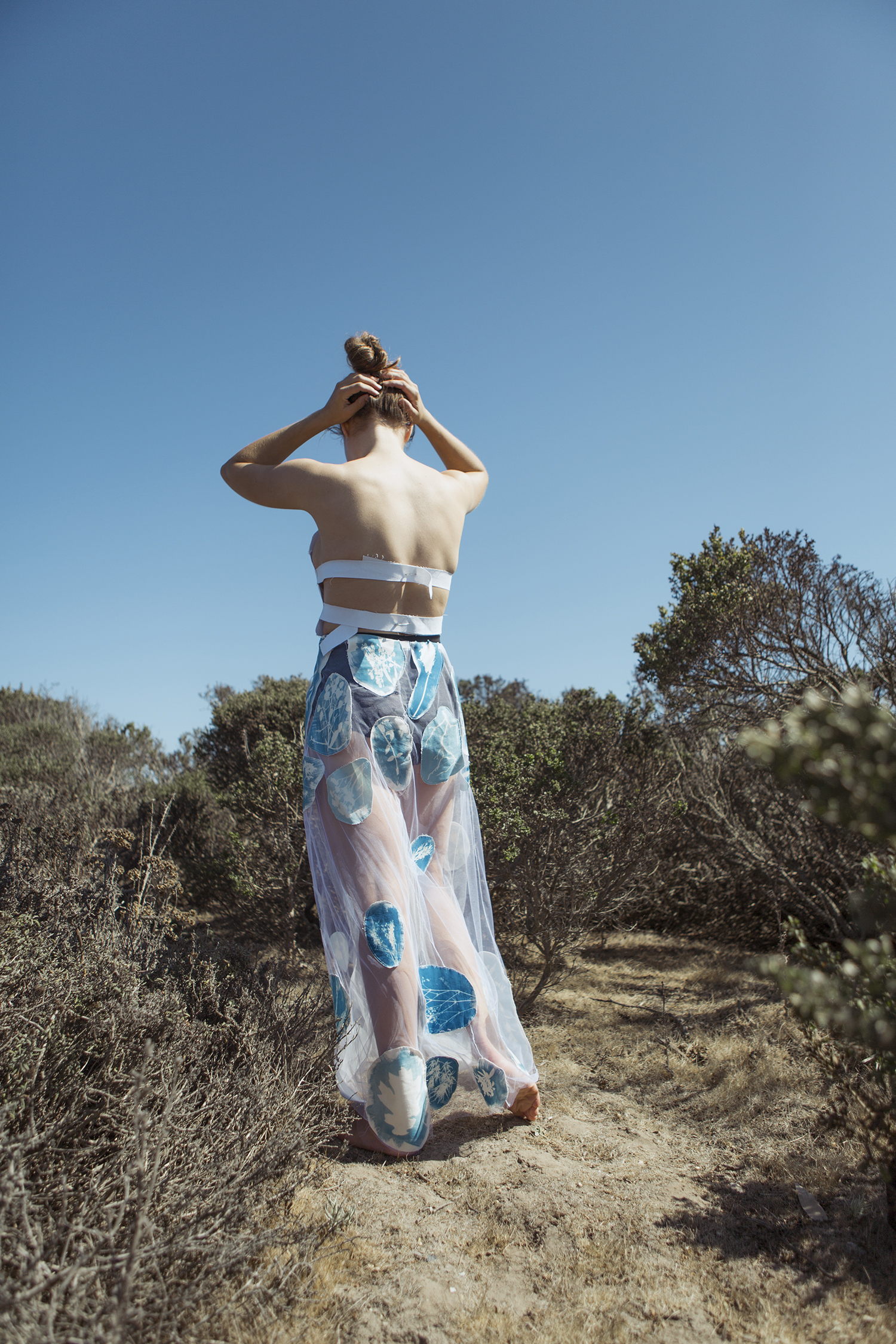 Yaaaaas I’m so excited to share this. FINALLY. I made my first cyanotypes about a year ago, and right after creating my first batch I made plans to translate the medium into something wearable. I started dreaming up the ways that photography and clothing can be combined, and I am so excited for what is to come. I am going to be working more with my own photographs in the future; printing them on vintage clothing and lingerie, but I felt that before I leapt into that world, I needed to pay tribute to the first queen of cyanotypes: Anna Atkins. I wrote a post about her a little while ago, here. Basically, she was a woman in the 19th century who pioneered the use of this early photographic method for scientific illustration. Her father was a botanist, and her “photographs” of plants–direct prints made from their shadows–were included in his publications. As this is the way cyanotypes were first used, I wanted to create a skirt and top out of dozens of plant prints. This one is made out of the foliage in my backyard, so it feels even more personal. 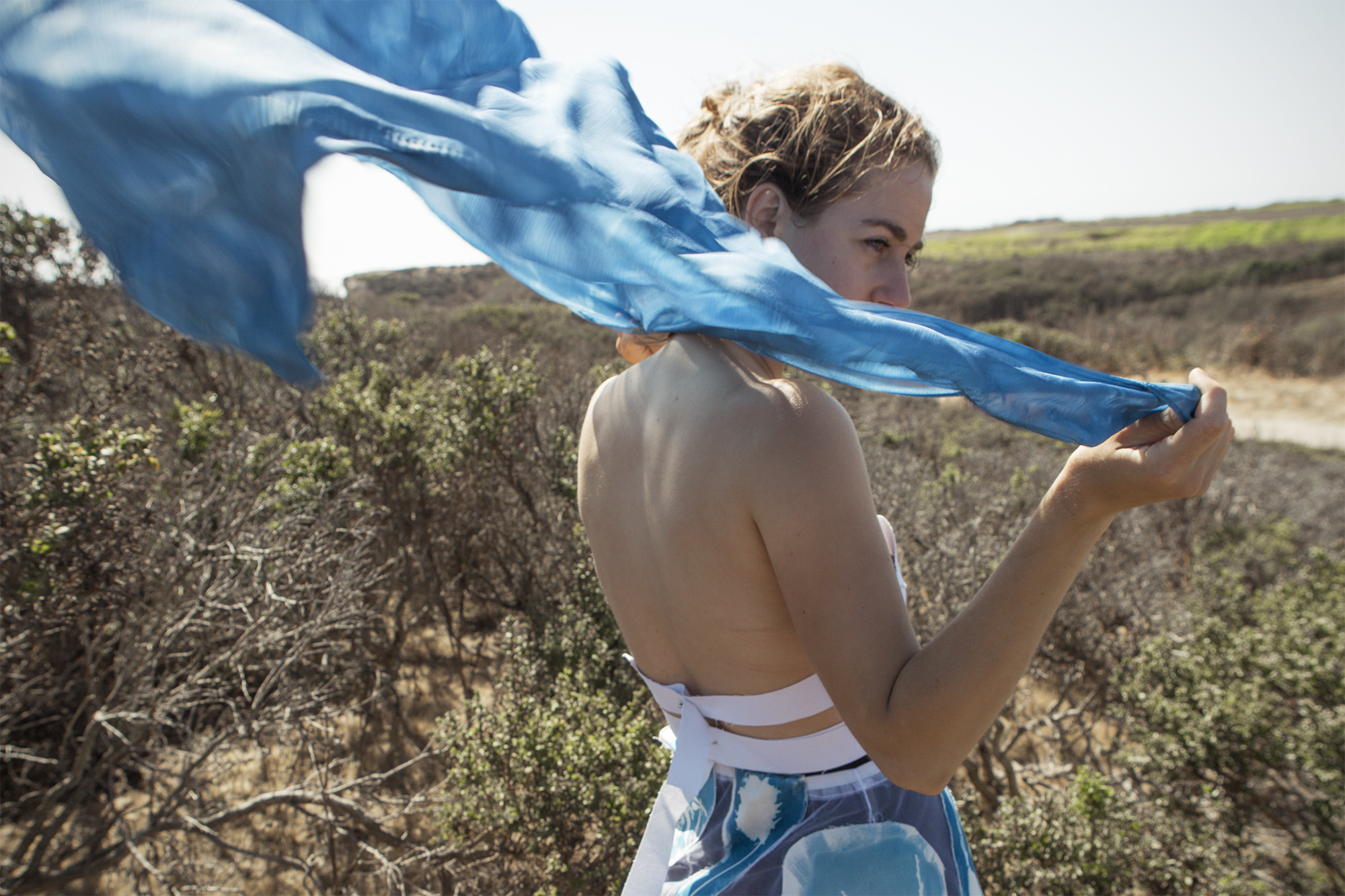 The process of creating this outfit took a lot of trial and error. I’m by FAR not the best seamstress. I am so much more patient with things like printing than I am with sewing. I can make something that stays together–so that’s half the battle right? But as for technique…I just rarely bother to figure out the best or most professional way to construct garments. I should work on that. But for this I just went on in, head first, designing as I went and praying it worked. For the most part, it did! I would love to make and sell more tops and skirts like this, but I think I would want to partner with someone who is better at clothing construction than I am. I like adding on the details to things that are already made, which is why I’m so excited to start reworking vintage. But with this, I felt I needed to prove to myself that I could make something out of nothing. 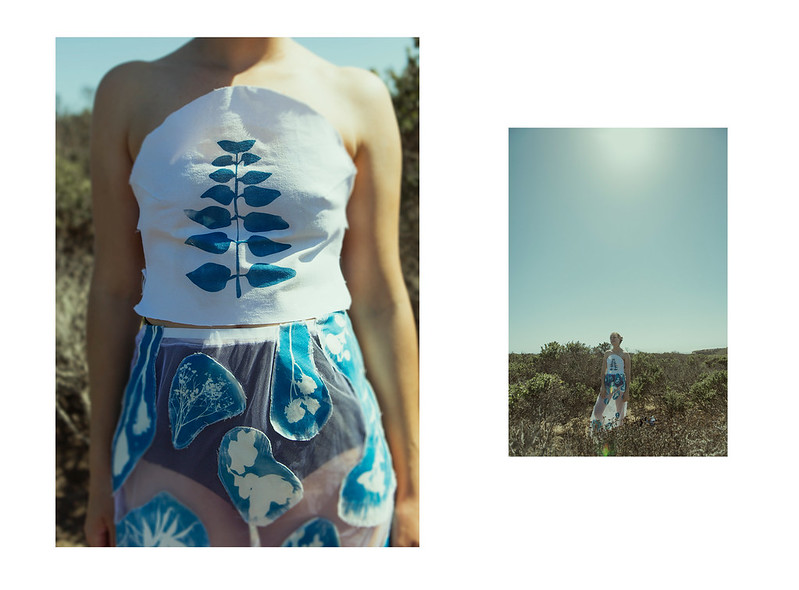 This look is comprised of two parts (well three, if you count the scarf I attempted, but it didn’t retain much detail and I need to experiment with that a little more). First is the little top. I was inspired by this fencing vest top by Dior. I love when clothing looks like armor, and I kind of imagined this top as a chestplate. I would love to keep working with this design and make it something like a signature piece. The most time-consuming, of course, was the skirt. I first had to create the tulle skirt, and again, I am not a master seamstress–certainly not with tulle. Attempts were made and I feel like it gets the job done. I then created around 30 little cyanotypes on cotton and sewed them on the top layer of the tulle. I learned that I should probably have created the “textile” first (sewn on the cyanotypes before constructing the skirt) but again, trial and error. Overall, though, I’m so proud of this. It feels like the step I needed to take before I start really diving in to new processes. 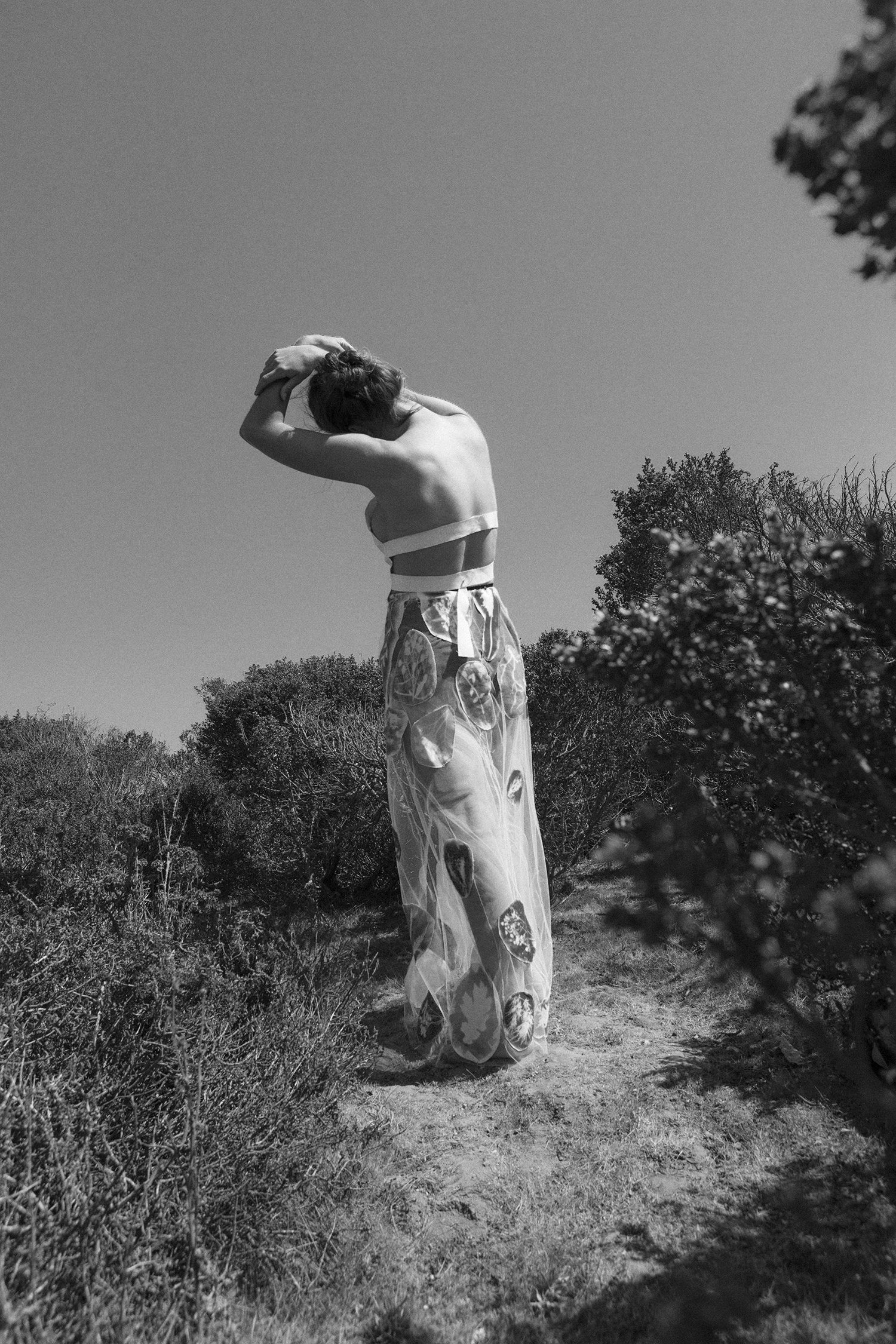 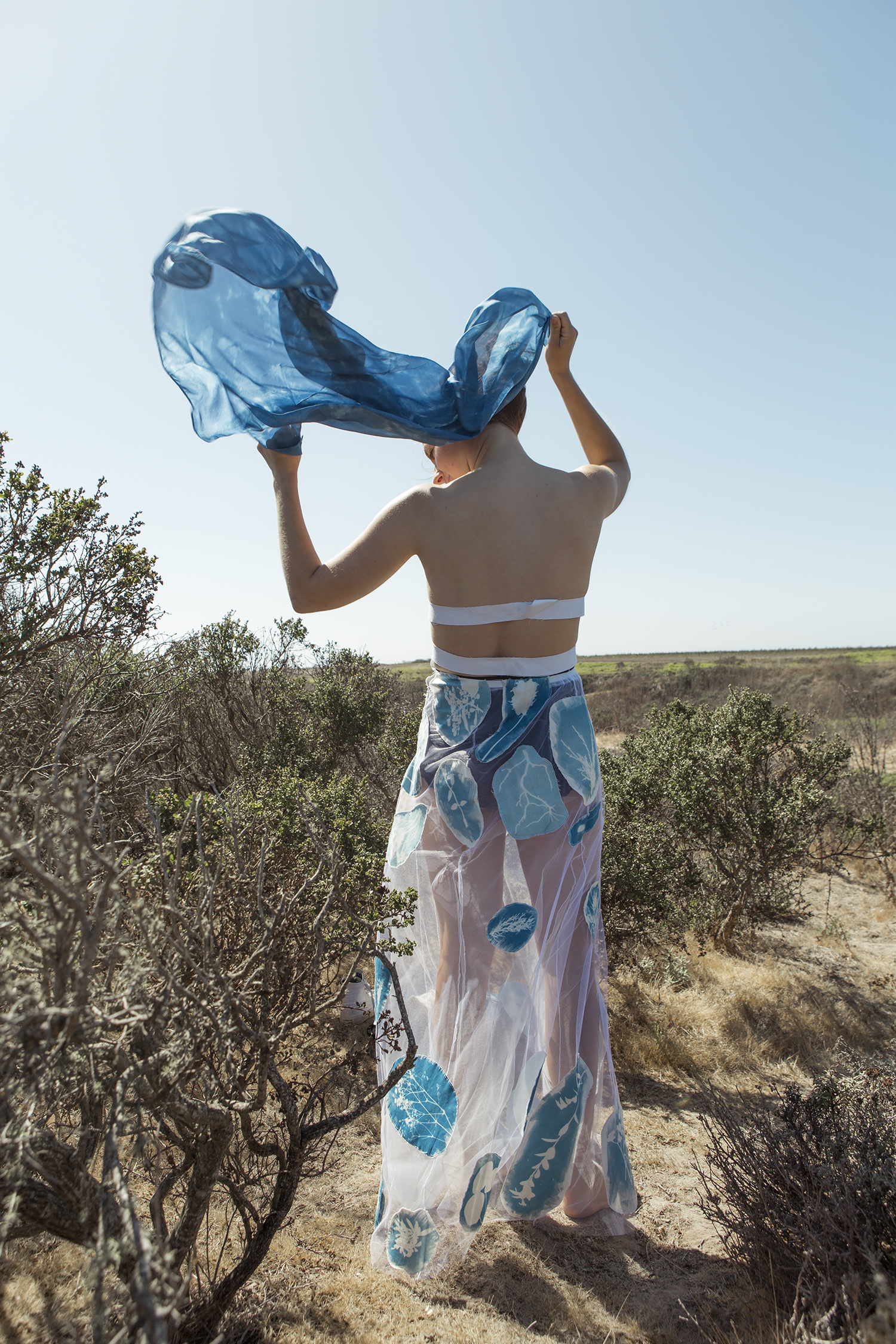 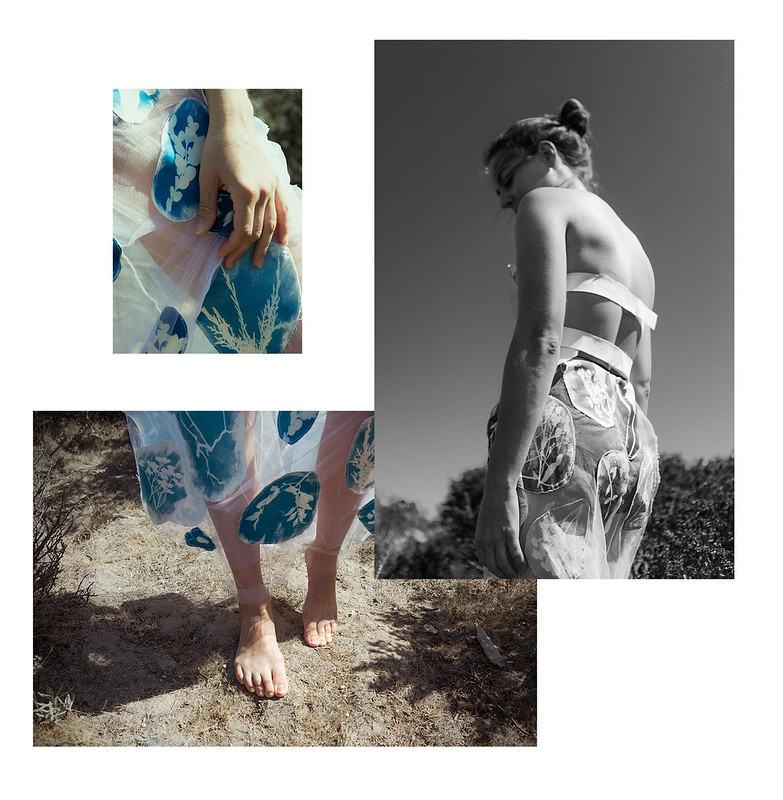 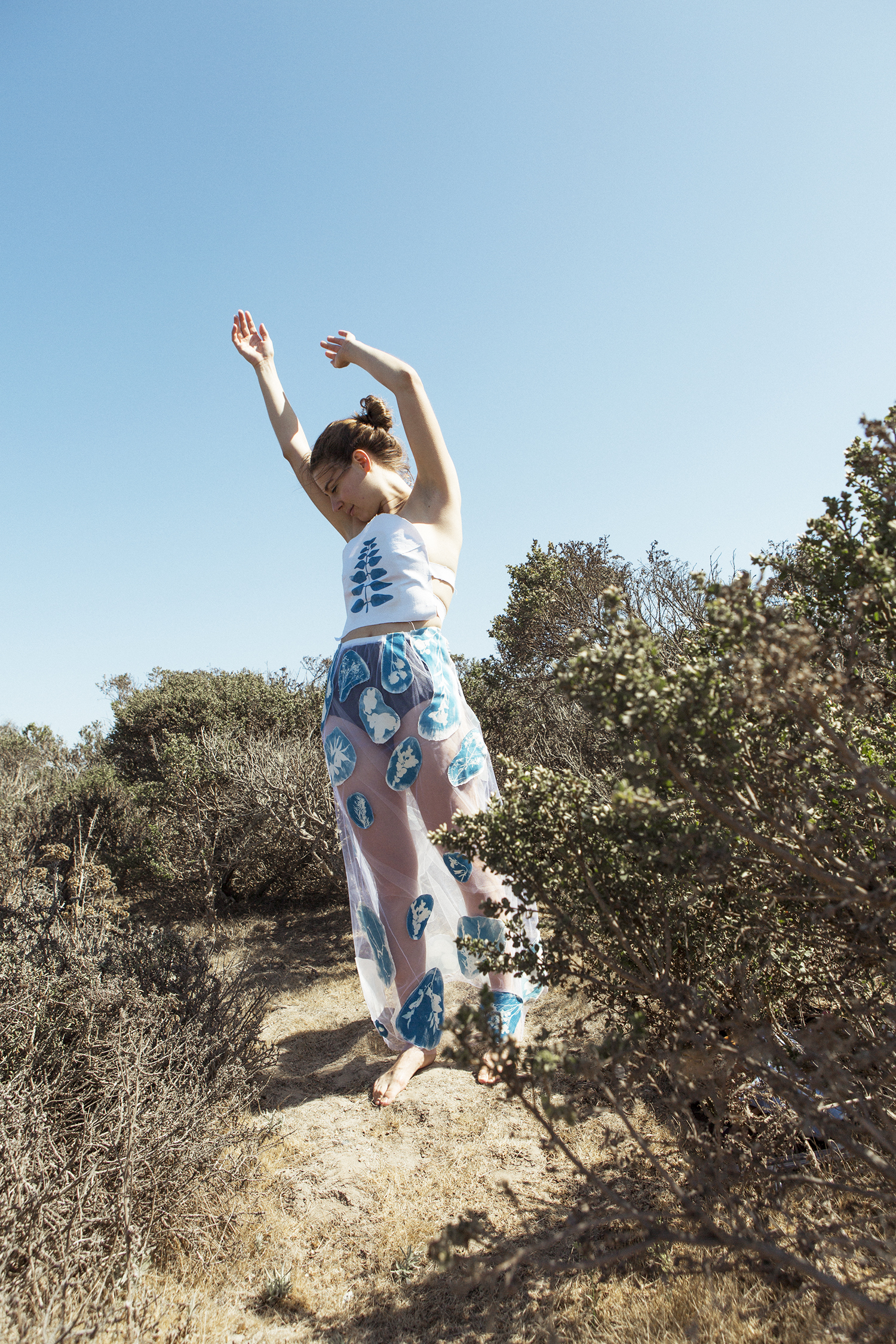 I hope you like my little masterpiece (hehe) and these photos I took in Santa Cruz. Thank you to the wonderful Hanna for modeling in the wind and under the watchful eye of many hiking families. Love you girl 🙂 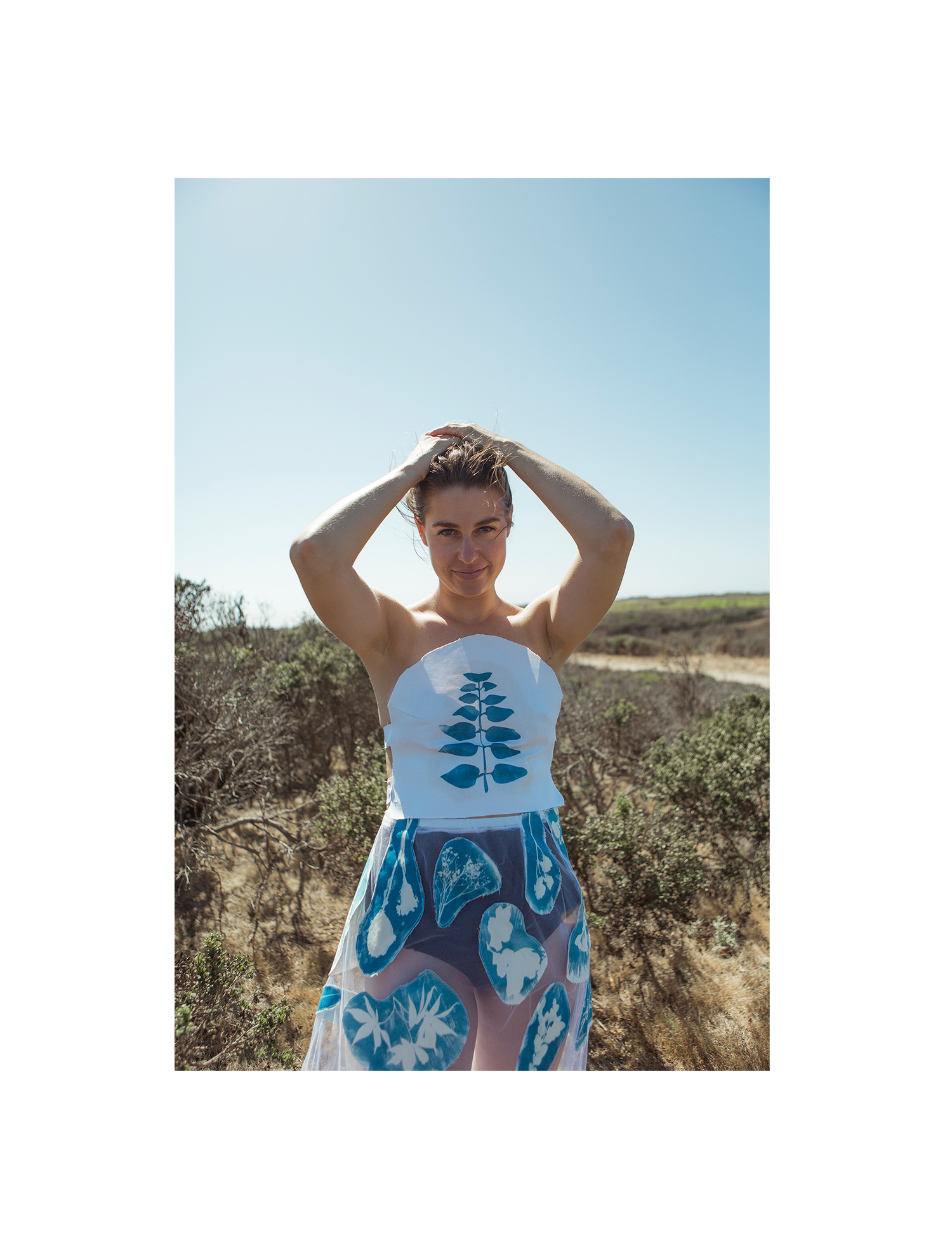 Photographs by me–my portfolio is here.