From the Studio: For Persephone

Persephone is painted (literally painted, sculpted, and written about) as Hades’s poor prey. The Greek myth goes that Hades, God of the Underworld, glimpses Persephone picking flowers in a field with Athena and Artemis. Overcome by her beauty, he bursts through the earth from the Underworld, captures her, and brings her down to live with him in the land of the dead. Persephone’s mother, Demeter, is distraught over the news that her daughter had been abducted, and in turn neglects the Earth and her duties as the Goddess of the Harvest. She demands that Zeus recover her daughter, and seeing that the people on Earth were dying without Demeter’s care, he forces Hades to allow Persephone to return to Earth. But Persephone had made a mistake: she, in her desperate hunger after capture, had eaten the seeds of a pomegranate from the only tree growing in the Underworld. Having eaten food of the Underworld, she was now obliged to remain there for some part of the year. It was decided that Persephone would split her time between Earth and the Underworld, creating the seasons and cycles of harvest. Thus, Persephone became the Goddess of both Spring and the Underworld, life and death. 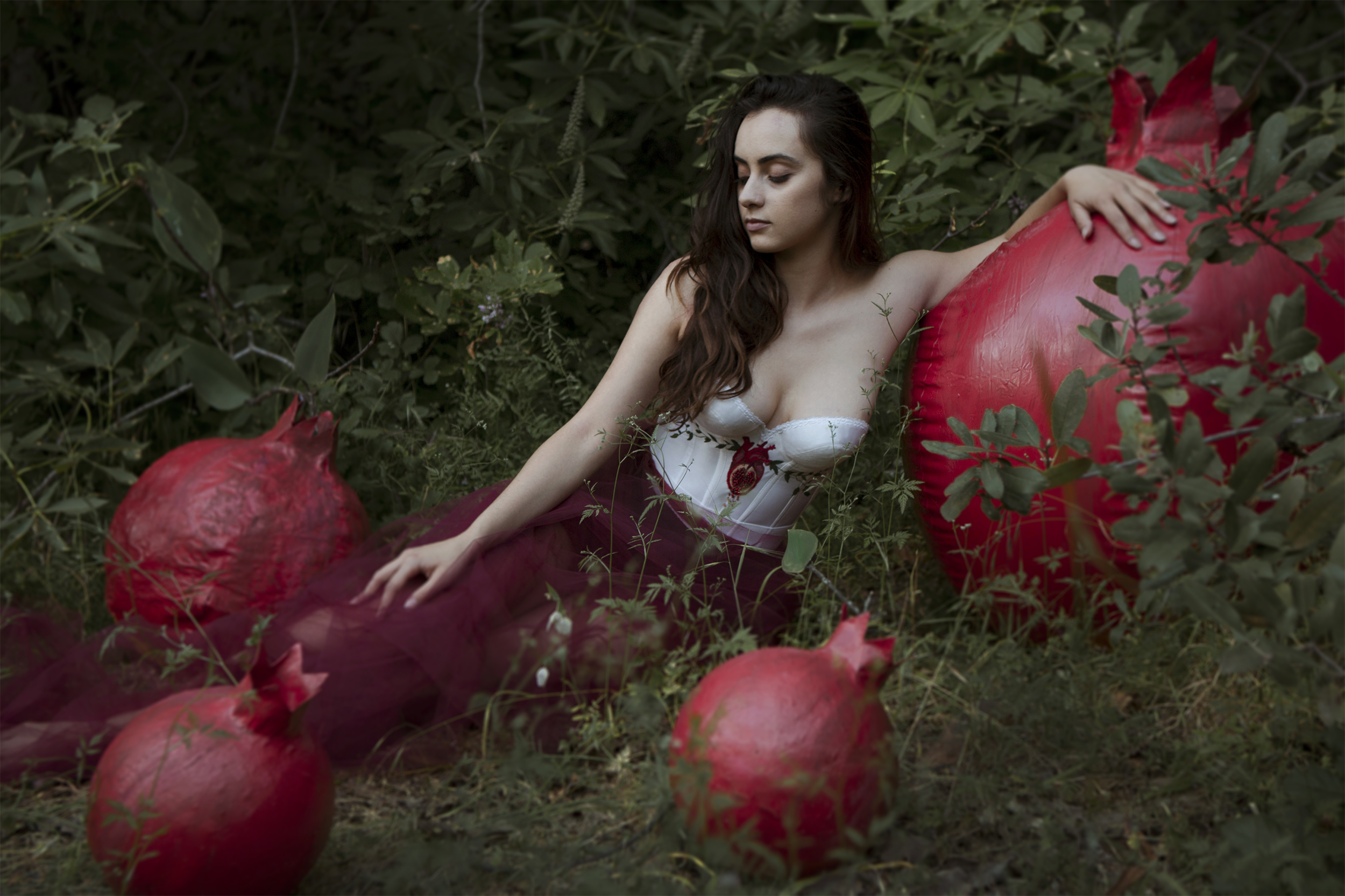 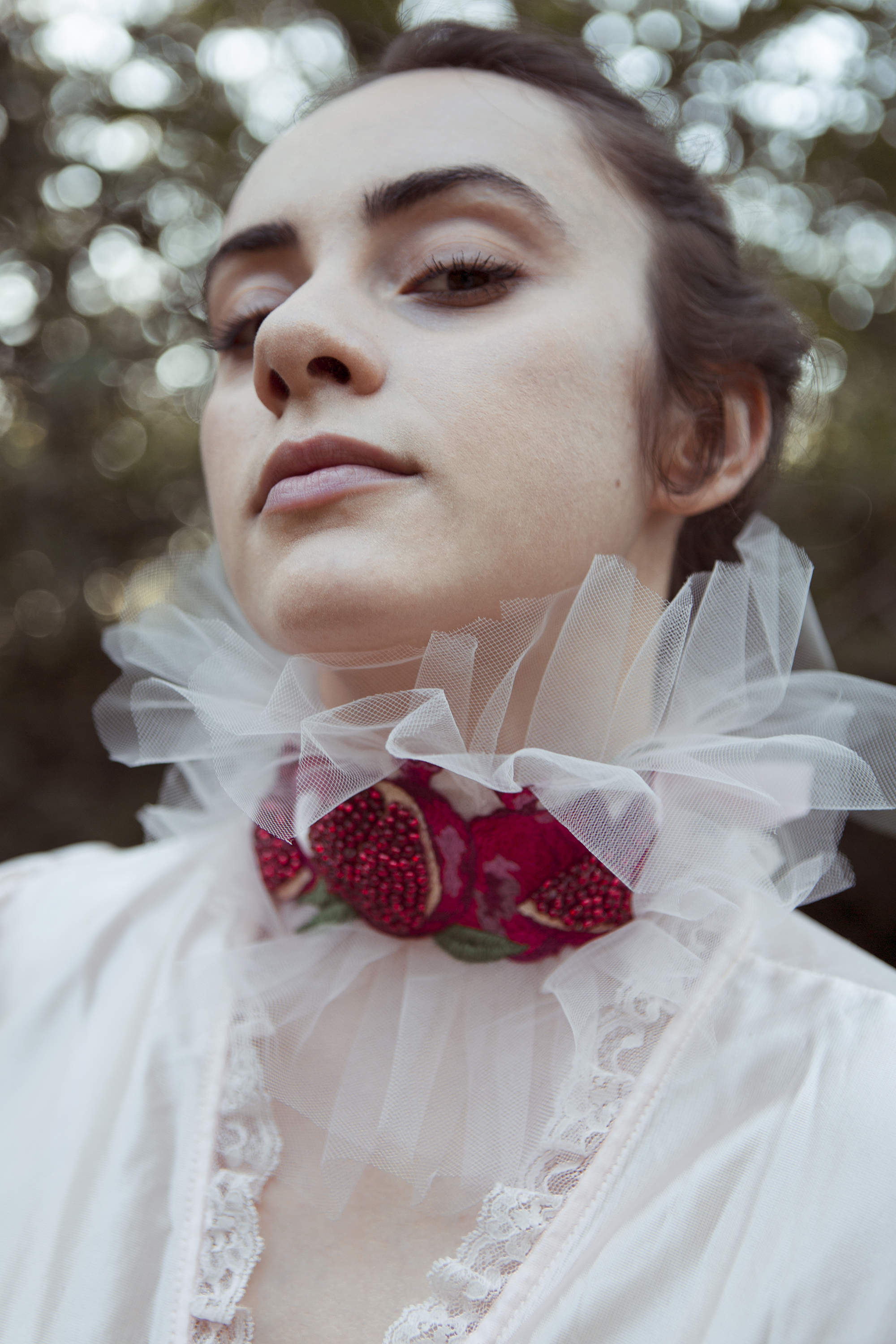 I’m not always in love with the aforementioned story, usually called the “Rape of Persephone.” On one hand, I understand that her story could be empowering. Persephone is forcefully taken into darkness and emerges as a queen and goddess of new life. She overcomes her obstacles, becoming more radiant than ever before. However, I’d also like to explore a different version of the myth here.

What if Persephone willingly followed Hades to the Underworld? What if a goddess of nature, flowers and warm spring sunlight was drawn to the darkness of a man like Hades? In this version she is not a damsel in distress abducted by a dark force. Rather, she chooses for herself to explore the shadow realm. She is a woman full of life and curiosity. She didn’t wish to stay within her mother’s sharp gaze, and instead wanted to indulge shadowy impulses and see where they would take her. This, to me, characterizes Persephone as a woman unafraid of the light and darkness in herself. Therefore, in this story, there is no “rape of Persephone,” and Hades is not evil. Rather, Hades resides in an unknown place and represents a mystery that Persephone is drawn to.

One of my favorite albums, Hadestown by Anais Mitchell (seriously listen to it, it’s incredible and Justin Vernon of Bon Iver sings the part of Orhpeus) casts Persephone as a lively queen who can offer the residents of the Underworld some respite from the monotony of their reality. She is sarcastic and bemoans the restrictions of the Underworld, but she also seems committed to Hades. When Orpheus journeys to Hades’s throne to beg that his lover, Eurydice, be brought back to life after a deadly snakebite, Persephone urges the hardened Hades to think back to when he met Perspephone and fell in love with her. There is love between Persephone and Hades, and they both willingly feel and express it. I like to believe that this wasn’t borne of a Stockholm Syndrome situation, but rather is an instance where opposites attracted and Persephone pursued the man she loved. 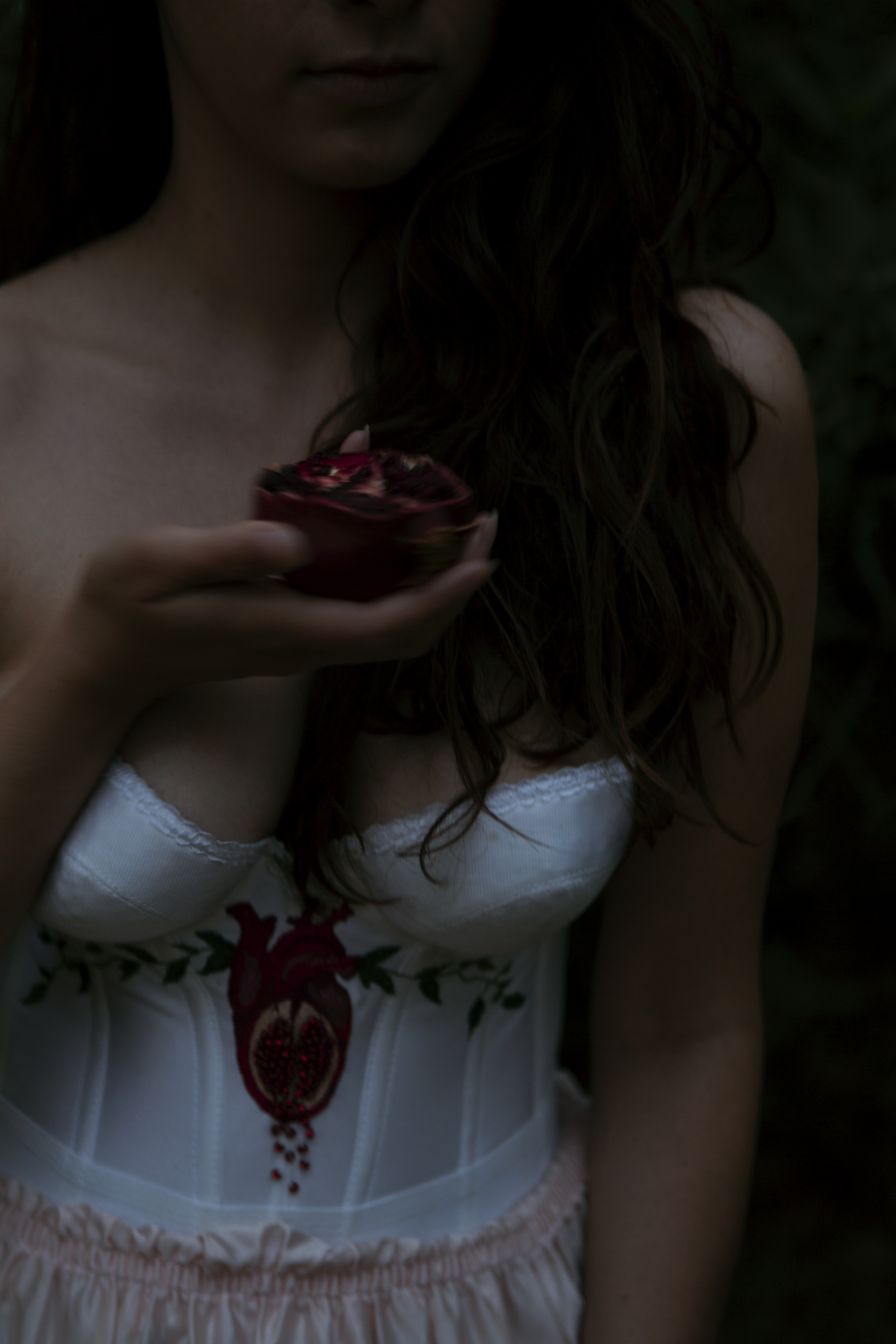 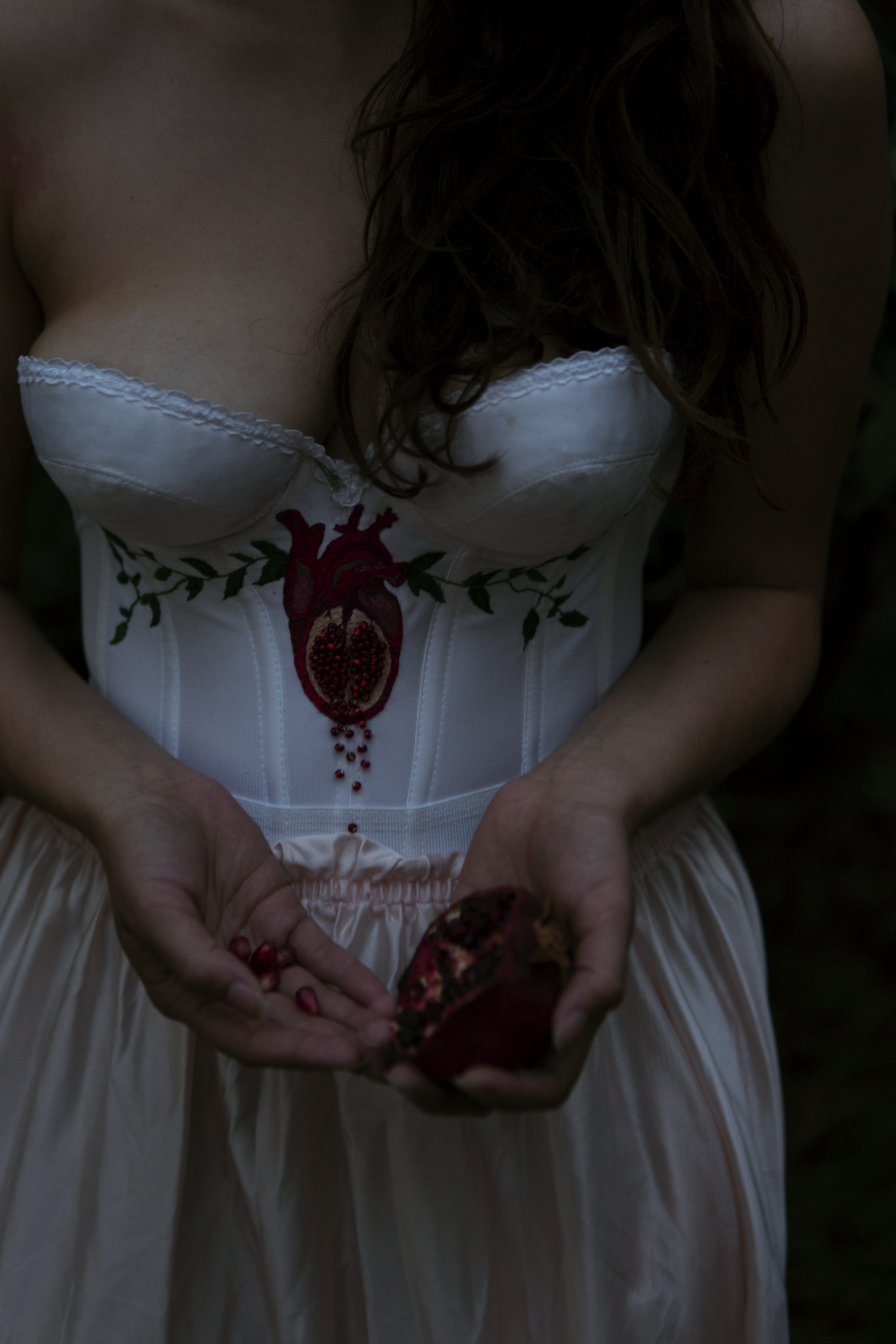 So the pomegranate remains a symbol of temptation like in the original story, but also one of a conscious choice to remain in this new place. The temptation is not in the physical hunger Persephone feels upon entering the Underworld, but rather in the desire to live a new life that tugs on her heartstrings. For this desire, she changes her fate.

I would love to hear about what Persephone means to you. Any thoughts on the different versions of the stories or meanings that can be gleaned from the myth overall? 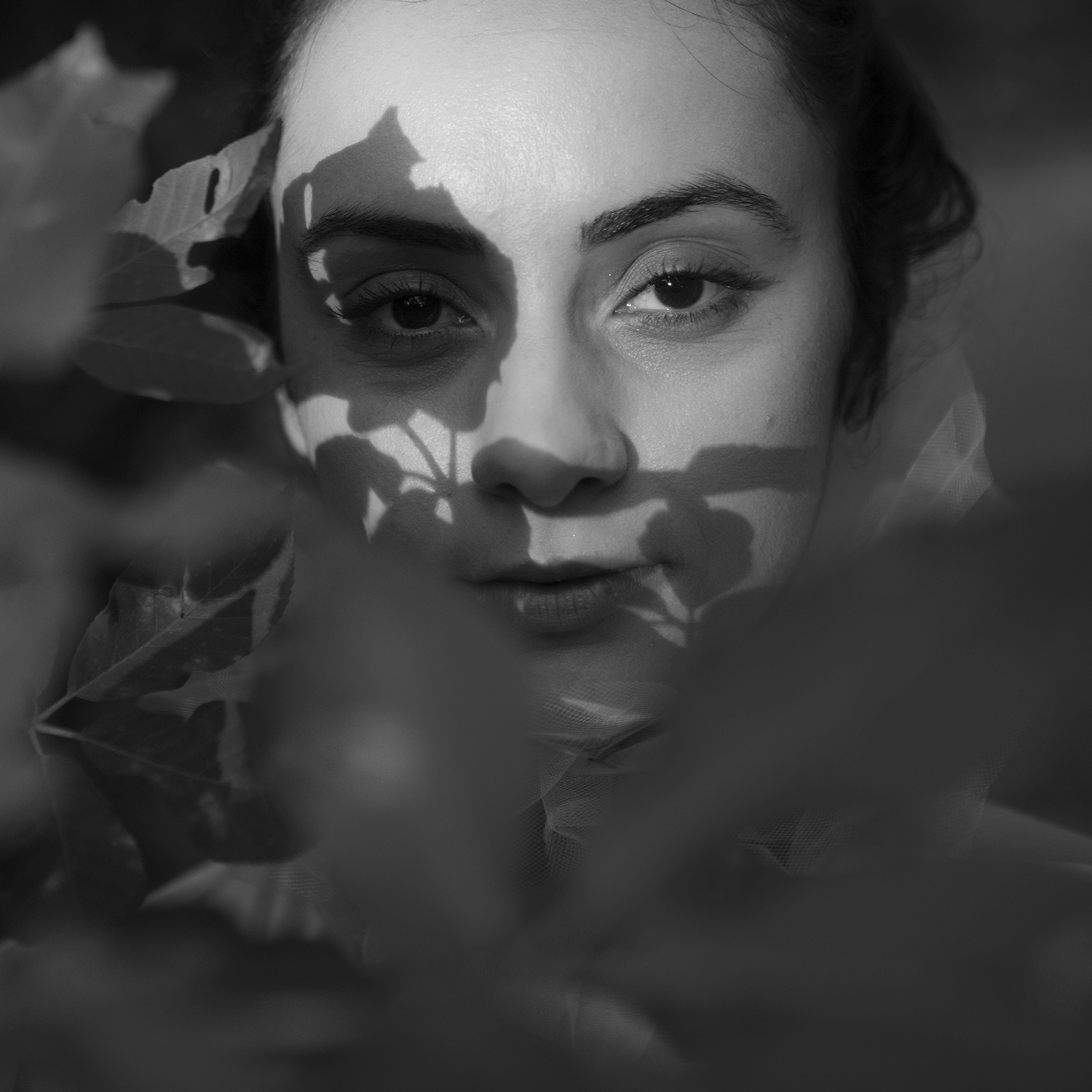 This brings me to the point of this post: to share some of my new work! To honor Persephone, I created these one-of-a-kind pieces for my shop. First up is a re-worked vintage bustier. It’s been my dream to create re-worked vintage pieces for so long, and I’m so pleased with how this first one turned out! It features a human heart/pomegranate hybrid, with seeds spilling out of it as if the heart were bleeding. I love love love the texture the seeds/beads added to the piece. This piece took about 50 hours of work and I’m so happy with it! The second piece I made for the “For Persephone” mini-collection is a Victorian-inspired embroidered tulle collar. This one features a row of pomegranates with even more seeds–they just glisten and glitter like nobody’s business. I love the drama this adds to simple looks. Gotta find someone brave enough to rock it! Check out my Etsy shop and stick around for more pieces coming soon! 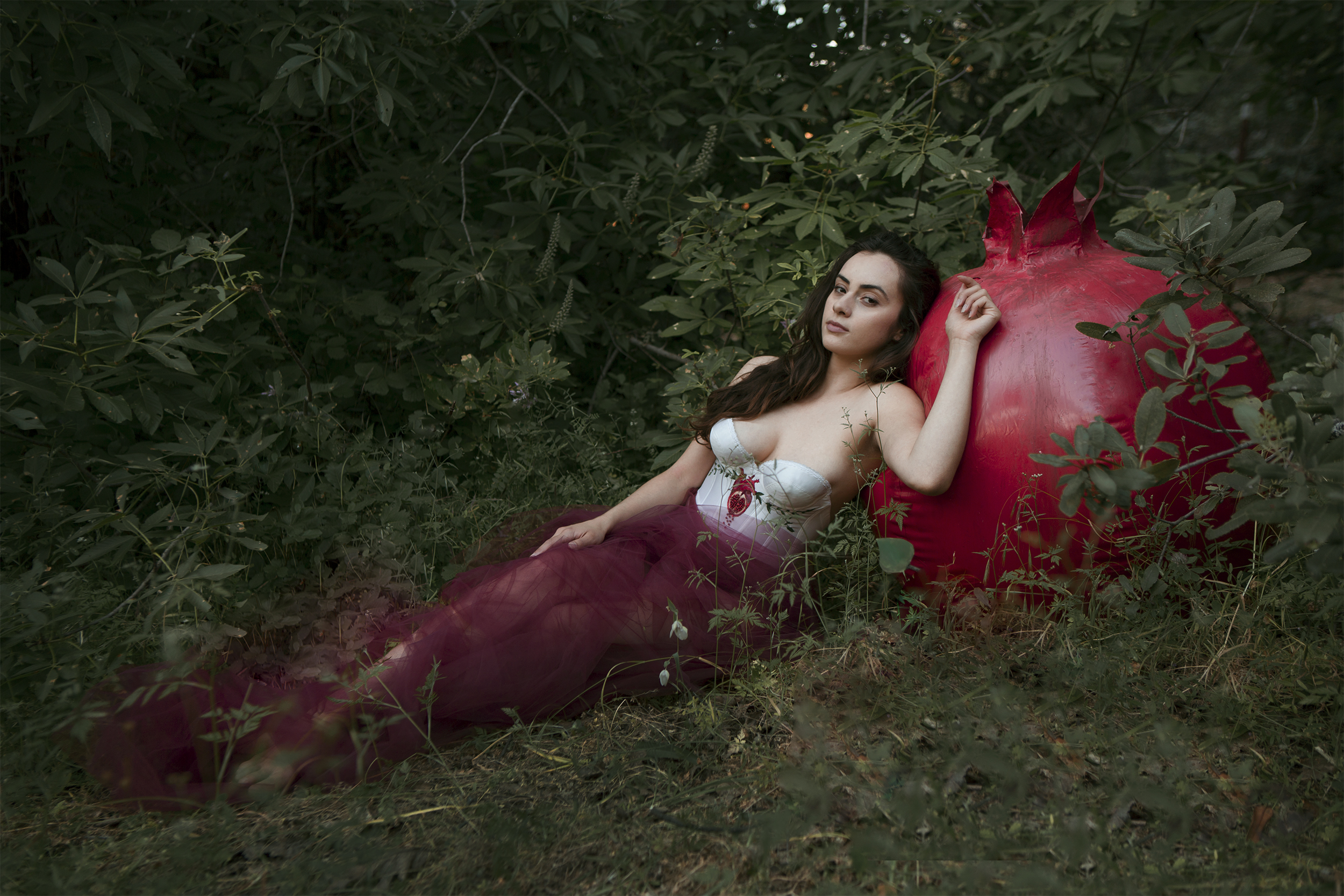 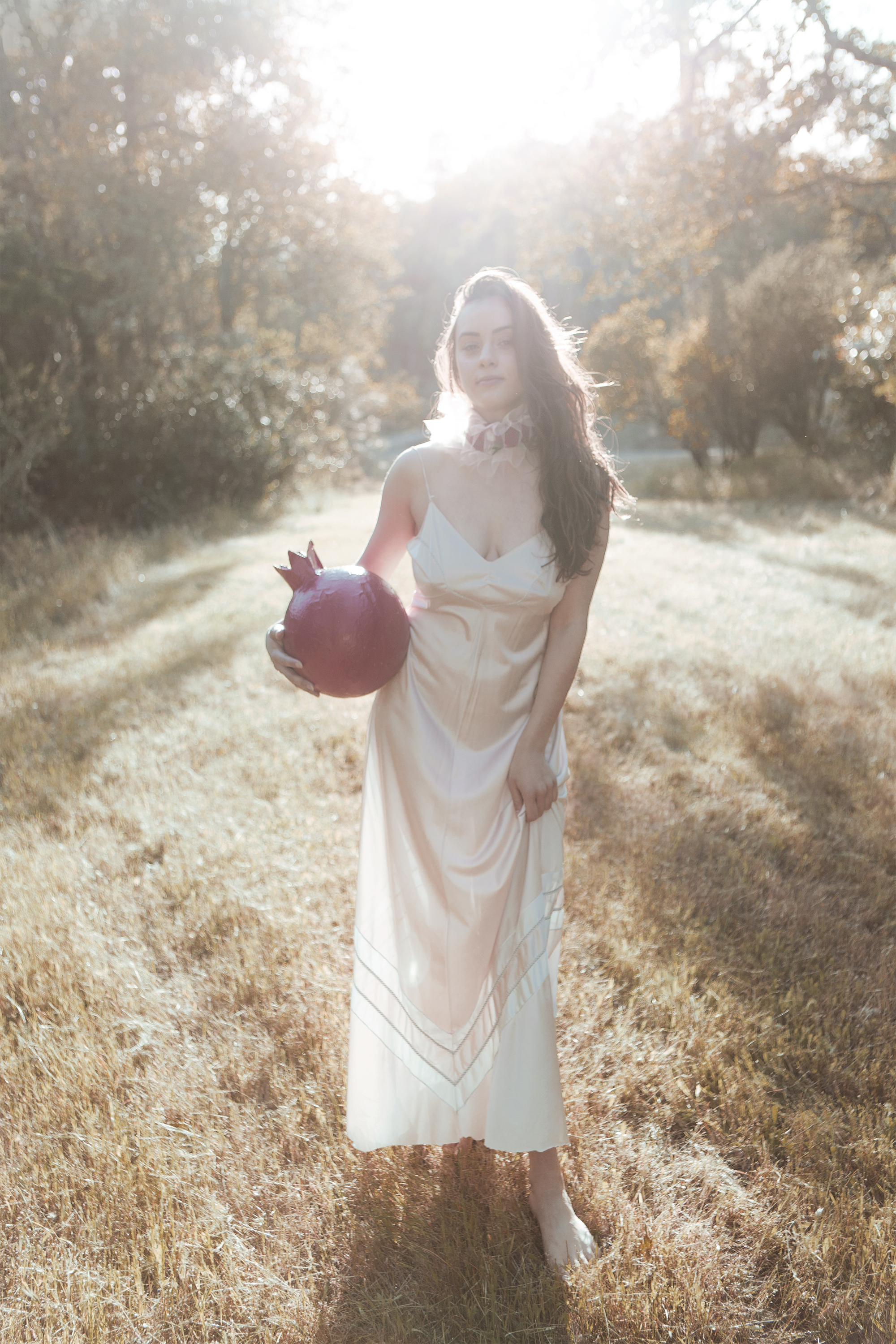 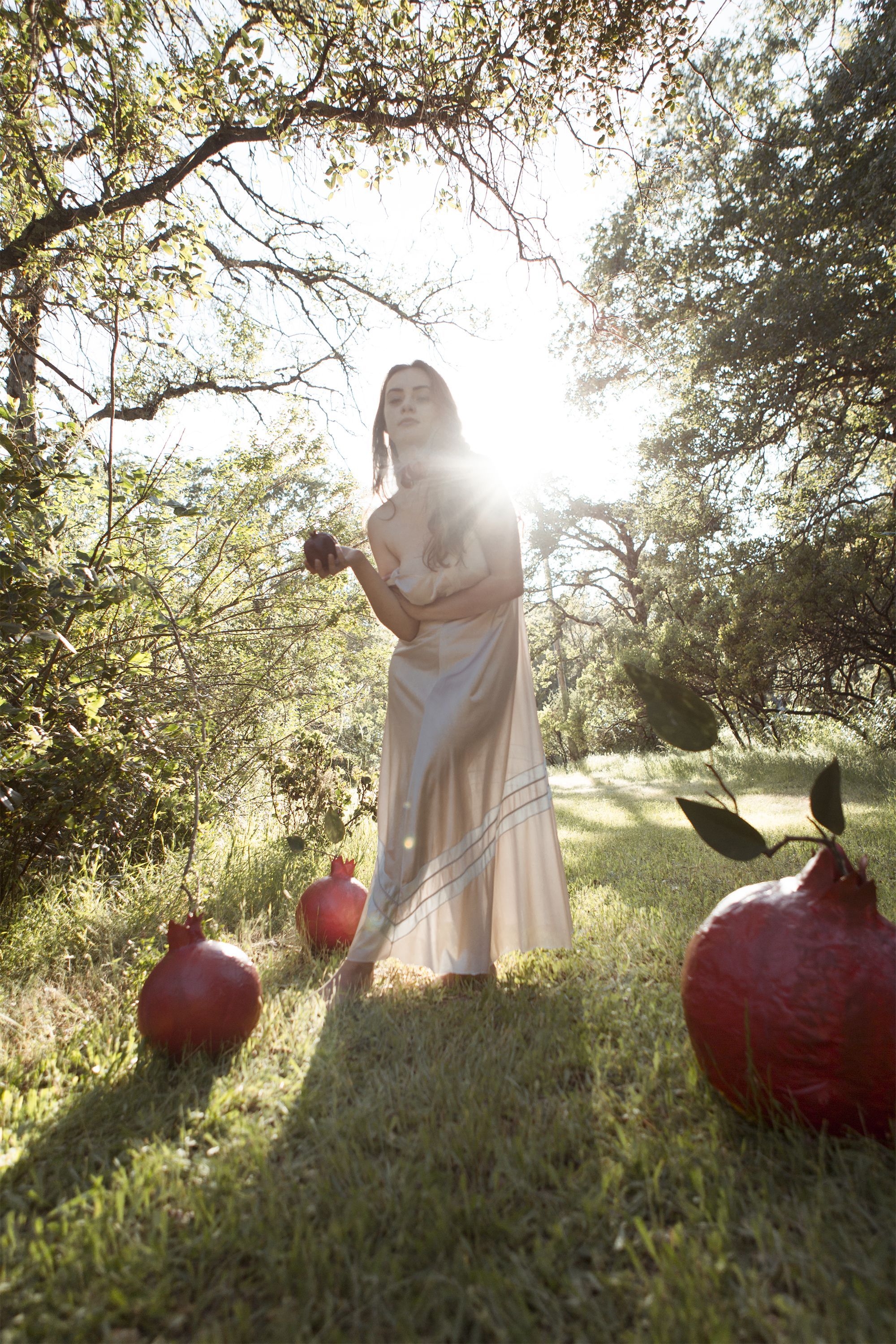 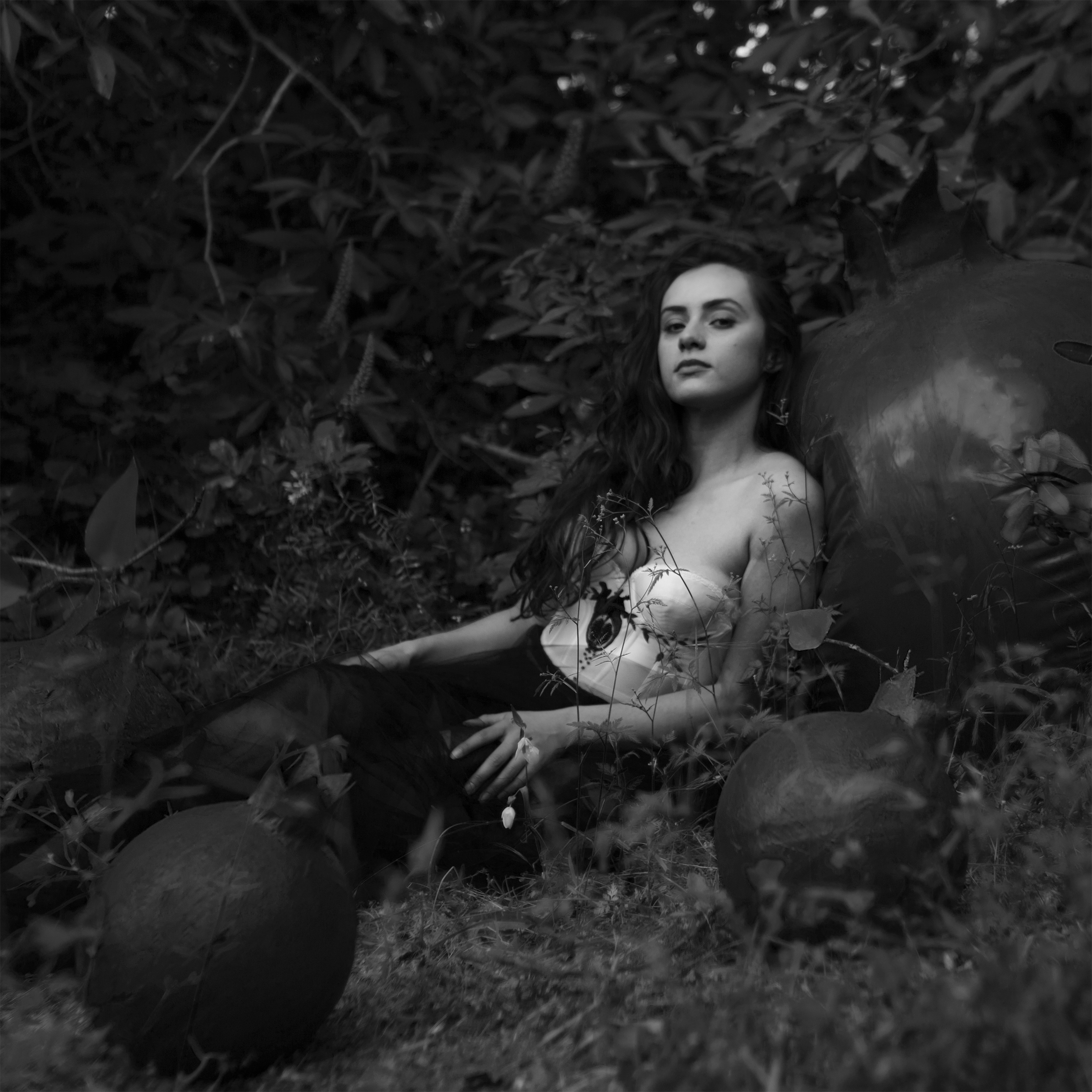 Thank you so so much to Janneke for modeling my newest pieces! It was actually our first time meeting and I’m so appreciative that she jumped right into my world and braved poison oak and mosquito bites to make my vision come true. It’s so fun to get to know people through taking photographs of them.

Bustier and Collar: Scarlett and Giselle 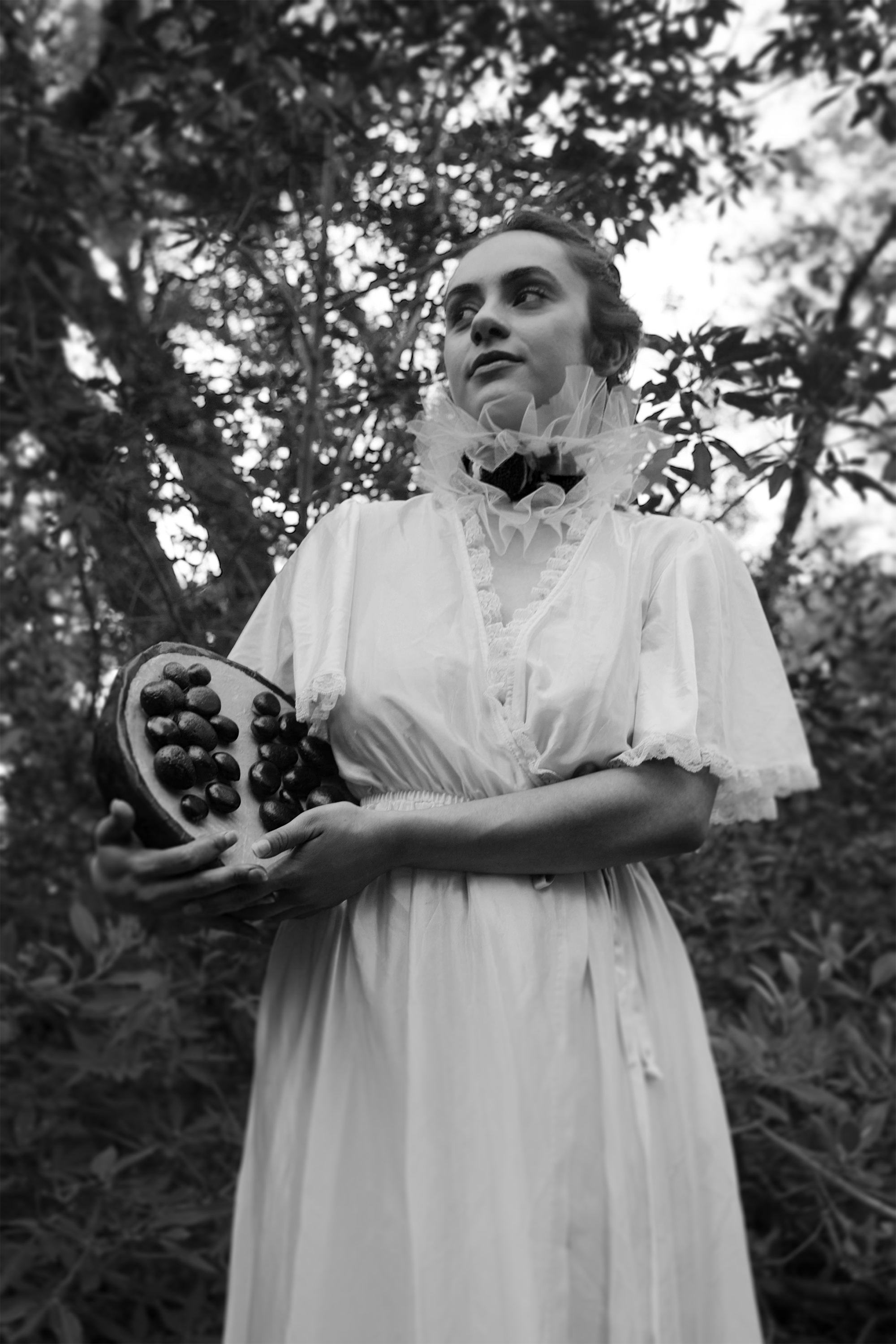