Picture Howl’s moving castle torn apart and made stationary. The gaping hellmouth holes, the whirring components, and the rusted edges all taken from the wizard’s enchanted home and mounted on a gallery wall. This imagery came to mind when I first encountered Lee Bontecou’s sculptures. Her work felt familiar to me–perhaps because of my personal connections to the Miyazaki film (although, of course, Bontecou began making art well before this film was released…perhaps the animators looked to her instead? I digress.)–but more likely because of the raw material she uses in her work and her fierce play between hard and soft forms. Her use of metal, canvas, and wire may seem harsh, but her works come to life as if made of flesh and blood. Her work has stuck with me, and I am pleased to be exploring it in my series of women who came before me. 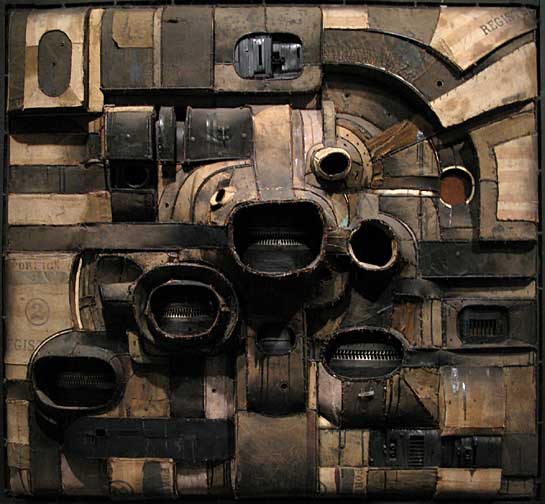 Lee Bontecou was born in Providence, Rhode Island in 1931. Her childhood was spent on the east coast and Canada, where she developed an interest in the natural world, which would later inform the organic shapes in her artwork. When WWII began, her mother and father joined the war effort, both working to produce military equipment.

Bontecou began studying art upon entering college in 1952. In 1957, she was awarded a Fulbright Scholarship to continue art-making in Rome. While there, she experimented with drawing. Her early work from Italy shows the artist’s interest in mechanical forms, as well as her play between light and dark. She developed a technique that allowed her to produce extremely dark black pigments, thus contributing to the contrast between void and mass in her works. In the 1960’s, she began to translate her 2-dimensional works into the 3-dimensional, making use of raw materials and machine parts. 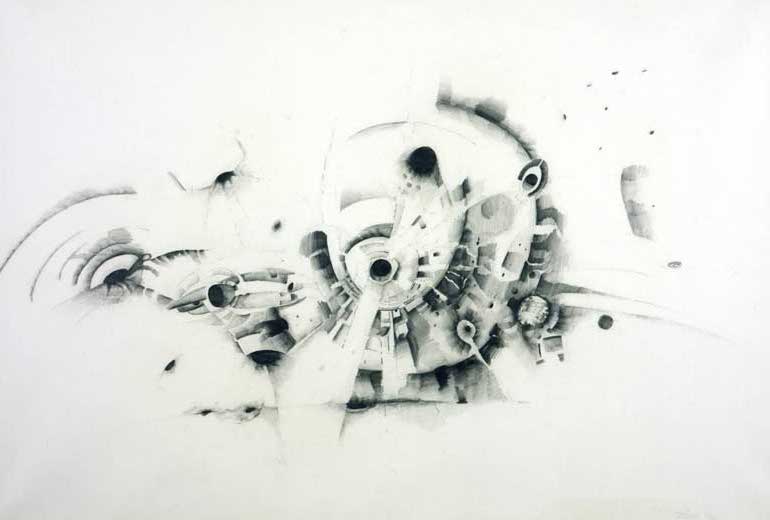 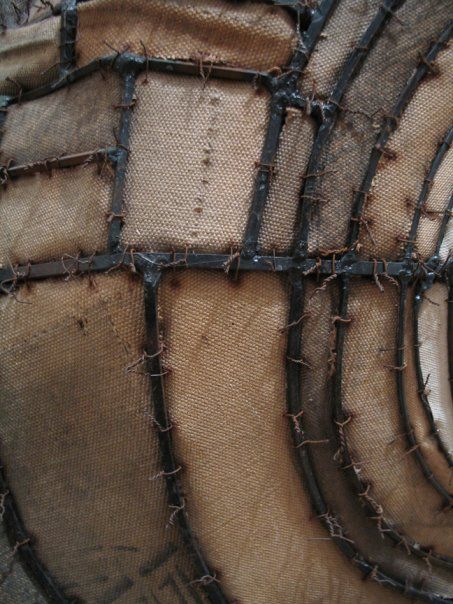 Bontecou’s sculptures are welded puzzles that either appear to have exploded, or are on the brink of doing so. Her wall pieces bulge and waver fantastically, whereas her hanging mobiles have blasted themselves into the atmosphere. The parts fit together, but there is a tension from within them that has blown them apart. Bontecou’s childhood spent watching her parents create wartime equipment surely steered her toward the technical execution of these pieces, but what lies at the center of them is no more than a human emotion. It’s like the inability to contain a feeling. The happiness, sadness, anger,excitement, or fear need to burst forward. In this way, Bontecou has combined something natural and pure with an aesthetic that is hard and mechanical. It describes a life spent wavering between technology and nature, one that we are all familiar with.

The sculptures are circular and cyclical, like a shell or plant. Everything fits together just-so, a pangea of metal and fabric. Organic forms meet hard edges. The mobile works, particularly, explore tension: both in the literal balance of hanging such an elaborate explosion of parts, and in the way they remind one of an atomic bomb. They are shaped like an atom with revolving electrons, but also something more frantic and complex. They are spaceships and spiderwebs, brain synapses and divine geometry. The one shown below, after all, does look like a castle–one that moves or even flies. I love this quote from artsy.net: “Bontecou has sought to capture ‘as much of life as possible—no barriers—no boundaries—all freedom in every sense.’” So much is wrapped up in Bontecou’s welded beauties. They contain nature and machine, but also thought and feeling. She uses a style that is so particular, and yet they seem to be universal. Everything about life is held in her works.

For more on Lee Bontecou, check out some of the links below:

From the Studio: True Love is Blind

From the Studio: For Anna Atkins