I’ve known Jonathan Reinhart for a while now. He went to my high school and I met him through the theater company my friend performed in. It was almost shocking how good he was on stage, and at some point I worked up the courage to ask him to model for me. He actually became a fantastic collaborator on our first project, a story called Circus Freaks, and I’ve had the pleasure of working with him a few times since then. Since then, he has become an amazing drag performer under the fantastic name Anita Procedure. One day I was poking around his Instagram when I saw his amazing version of a drag Rococo outfit for a Rocky Horror show he attended. Jonny has always amazed me with his creativity and fearlessness, but this costume took him to a new level of #flawless. I commented on it (PROBABLY IN ALL CAPS) asking him to do an interview and photoshoot for my blog and he kindly obliged. And so, you lucky readers, here is the shining star that is Jonathan Reinhart in Marie Antoinette drag. 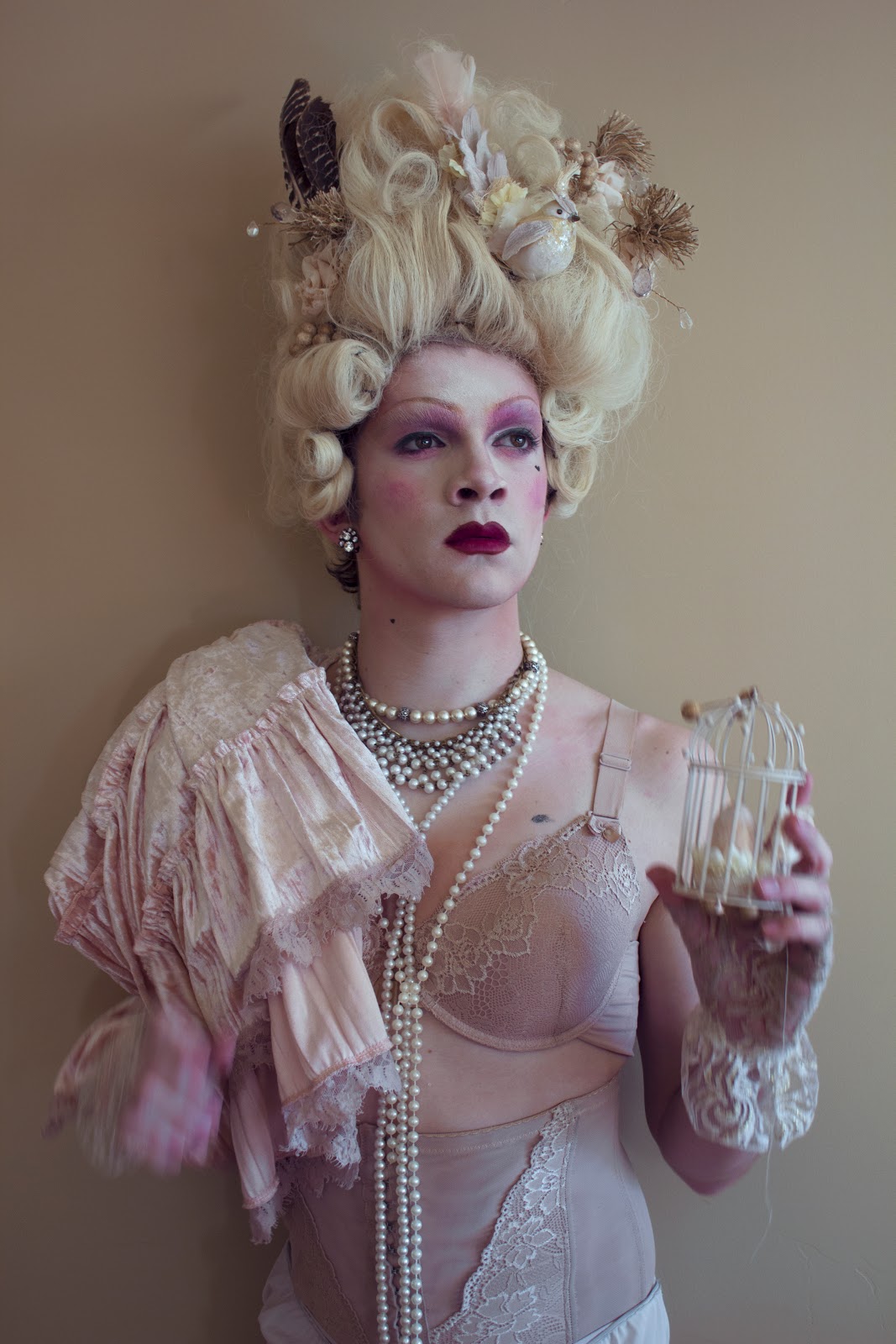 I first saw you on stage back in high school and I was struck by what a powerful and emotive actor you are. Can you tell me about your background in theater and how that transitioned into drag? What first drew you to drag?
Wow, thank you my dear! I grew up doing church plays as a kid, and was always very much a performer. When I was really little, my mom and older sister used to put dresses and lipstick on me. I think that laid the foundation for my future cross dressing. Haha. I continued doing local theatre, and at about 14 or 15 I found out about drag, and started dipping my toes into it. A theatre friend and I got cheap wigs from Party City, put on some makeup and my mom’s clothes, and strutted around the house. I think what kept me interested in drag was the art of the transformation. As I got better at makeup, wigs, padding, and everything, I saw how much you can fully transform into something else. Not even necessarily just another gender, but you can become an otherworldy creature. I think drag is magic. The way people receive you, and just the way you interact with people when you’re in drag. Suddenly everyone has a smile when you talk to them. You’re a bearer of fun, light, and irreverence. 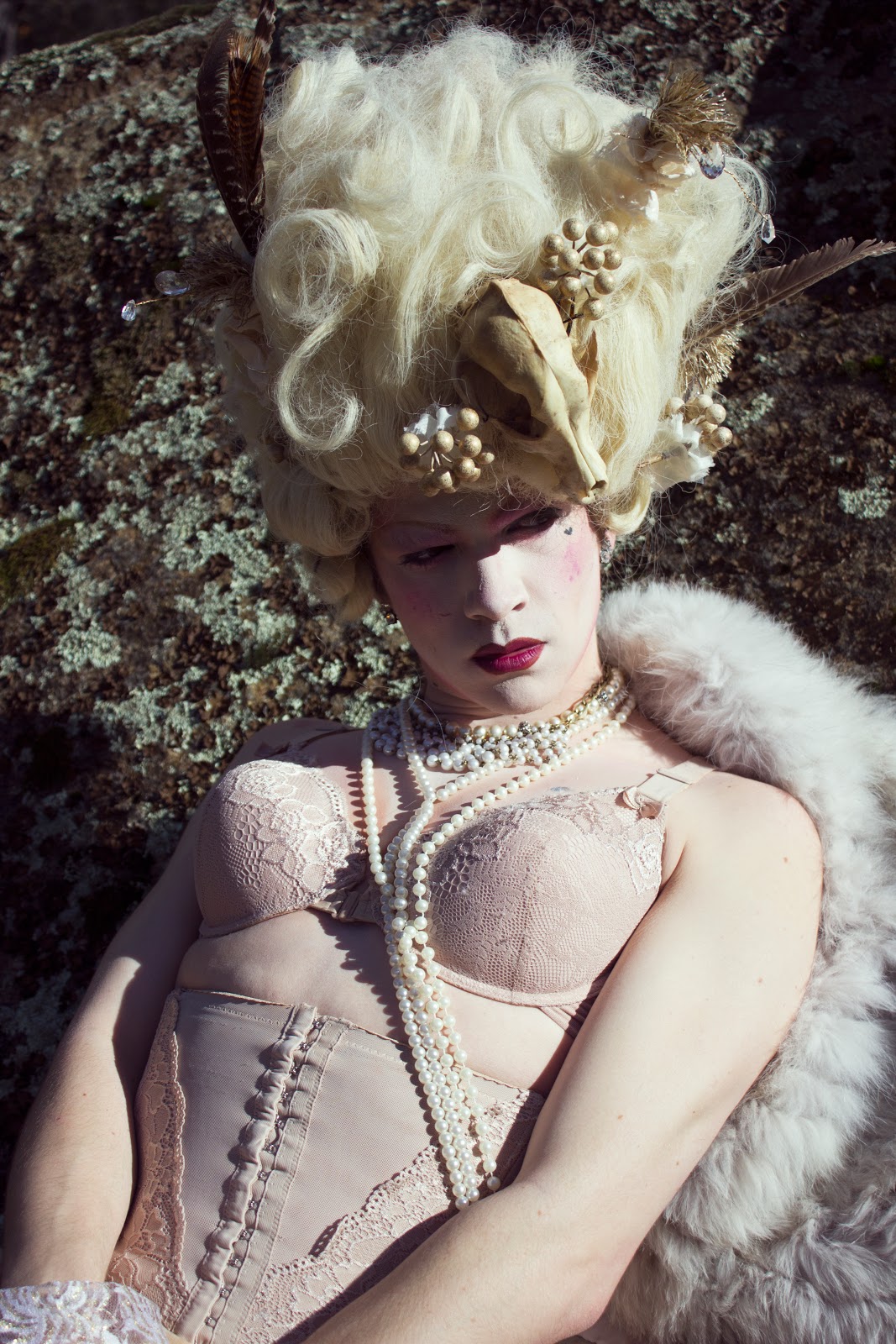 That’s a wonderful way of putting it! So even though you are dressing as a woman, you are kind of creating your own gender and persona. I think that’s why we both responded so strongly to the rococo–it’s this fantasy of femininity and we kind of used it as a way to mock traditional femininity. How much of drag is about gender and sexuality for you?
That’s a very loaded question… I think gender and sexuality are weaved into the fabric of what drag is. It’s a blurring of genders. Biological women do drag. Straight men do drag. Transgender women do drag. For me, drag is about breaking down gender roles and just looking fabulous and wearing whatever you want. Drag isn’t sexually exciting to me in the way that it is to some people, but there’s definitely a sexiness in the taboo of wearing things like heels and fishnets… and I tend to (or try to) be a sexy, seductive performer. 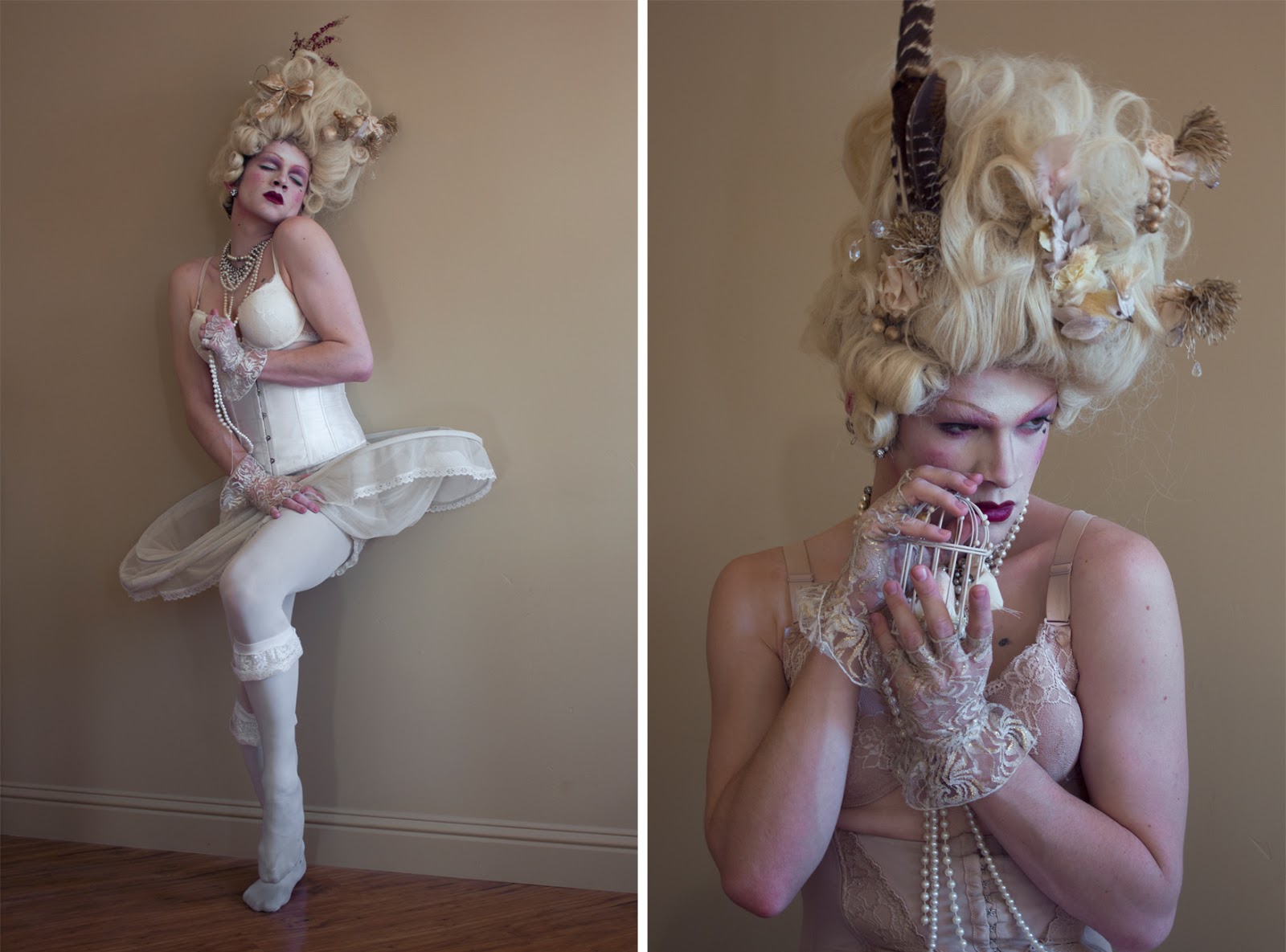 We both grew up in a very conservative place. Can you tell me about the drag community and how it differs from the setting you grew up in? Is the community a big part of your love for drag or is it more the transformation and performance?
It’s hard to speak about the drag community as a whole, because there are so many facets of it… but I think it has a lot more in common with conservative communities than you would think. In both the drag community and other communities, everyone has their own idea about what’s right and what’s wrong, and when you delineate from that, it can cause drama or ruffle feathers. But you have to find your own tribe. The queens that I do feel very close with are extremely supportive and nurture creativity. For some queens, the community is their whole life. I’m definitely more focused on my own performance, and my close circle of friends. 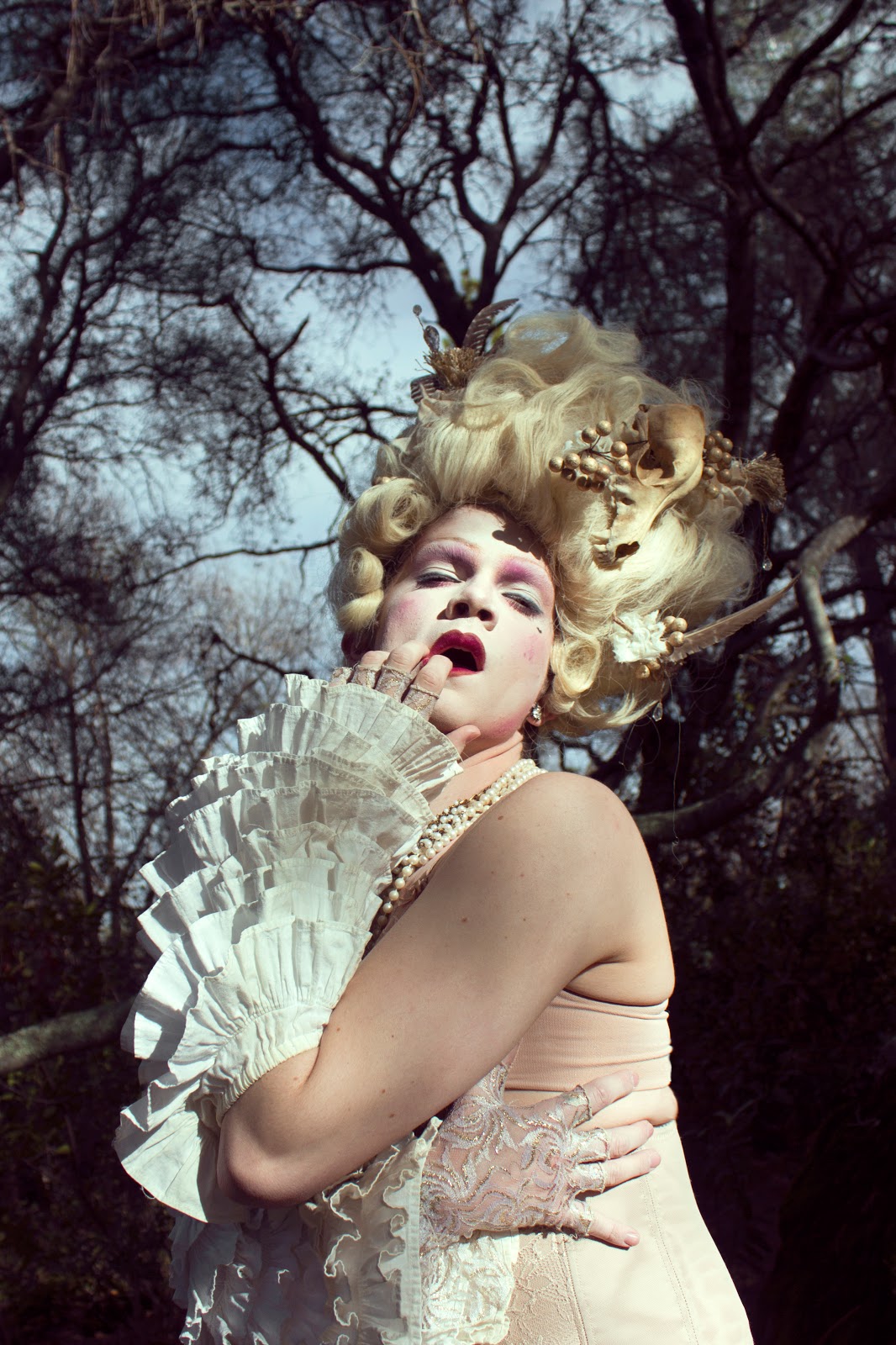 So, like anything, you just have to find your place in the community and do your own thing. Which brings me to the fun questions: what have some of your favorite performances been? What is it like for you on stage?
My favorite place to perform is in a theatrical setting. I’ve been heavily involved with Green Valley Theatre Company’s “VerteFeé Cabaret”, which is a fabulous, raunchy variety show inspired by Weimar-era German cabarets located in Sacramento. Some of my favorite numbers I’ve performed are “Young & Beautiful” by Lana Del Rey, and “Drop Dead Gorgeous” by April Smith and the Great Picture Show. Another favorite experience was when I played Morticia Addams in the Addams Family musical at Roseville’s Tower Theater, directed by Jennifer Bortz. It was a rare opportunity that really challenged me, and I hope that in the future I can do more gender bending roles. Getting into drag and being in drag for several hours is extremely uncomfortable. But when I get on stage, I’m focused on performing. It’s always thrilling stepping out and feeling the energy of the crowd, and giving them a unique, exciting experience. 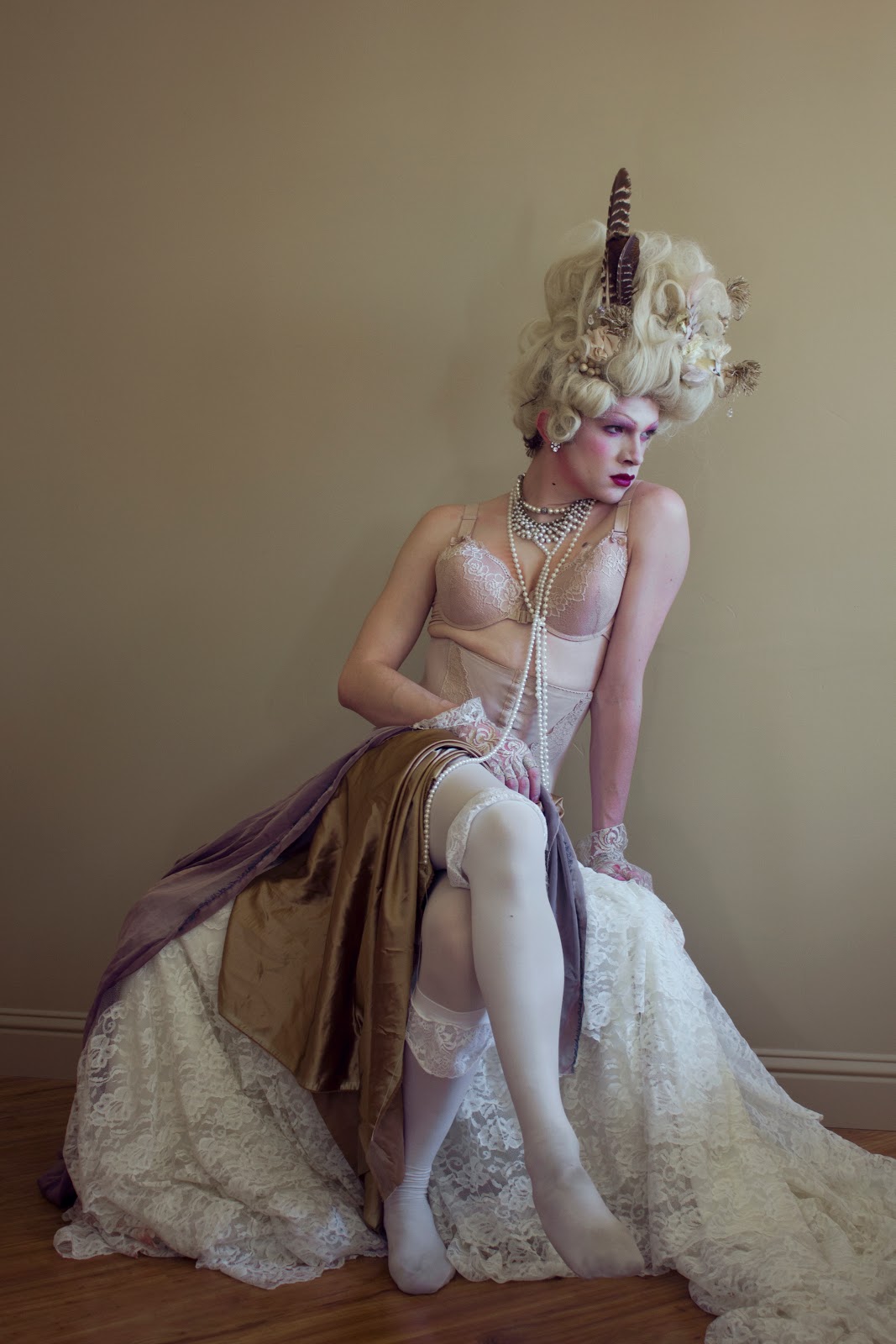 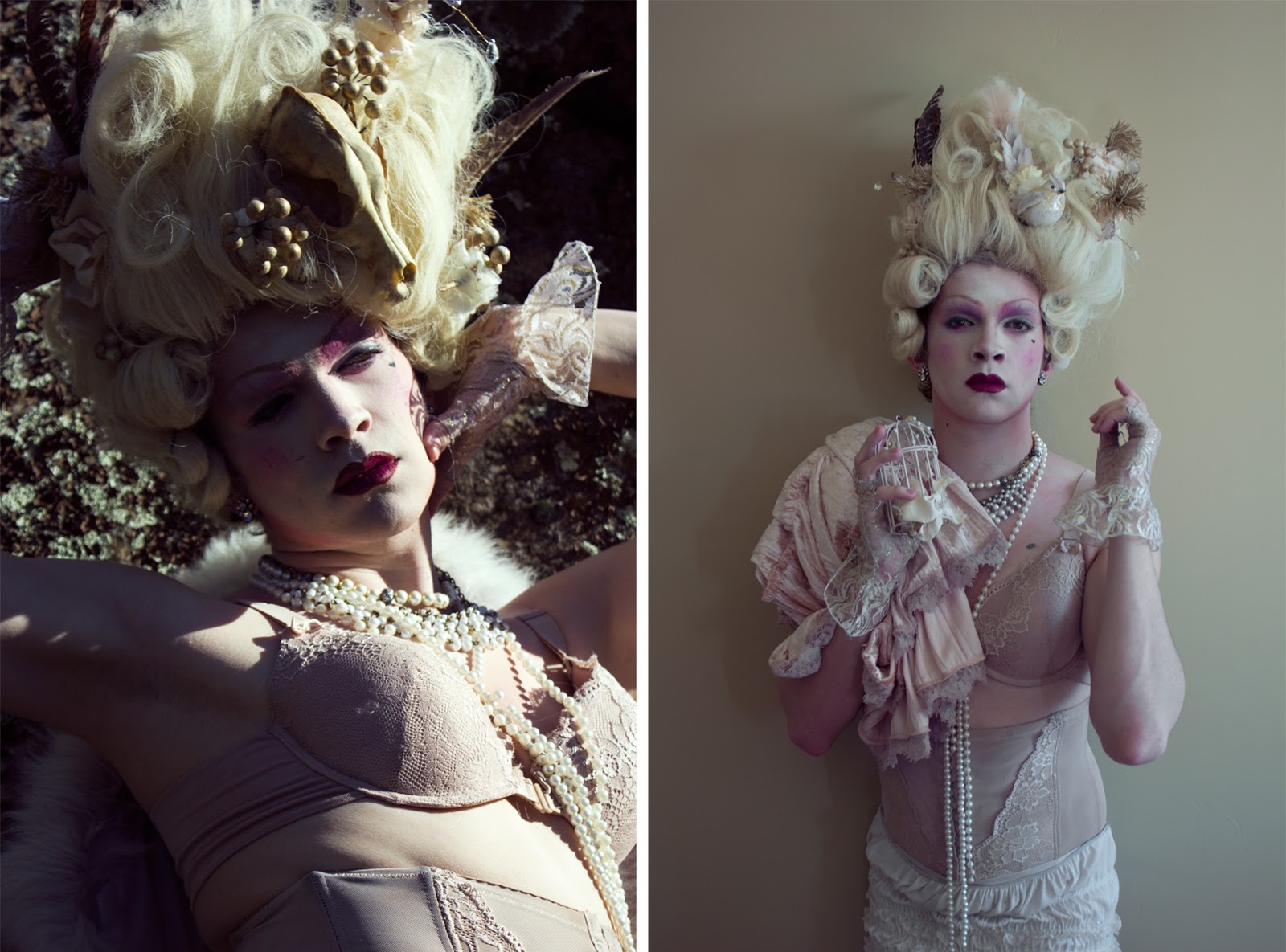 Photography: Jenna Opsahl
Model, Makeup Artist, Drag Aficionado: Jonathan Reinhart
A huge THANK YOU to:
Margie Rudolph for the stunning hair accessories
Luna Nova for the best Marie wig we could have asked for
Christopher Cook for an amazing collection of lingerie 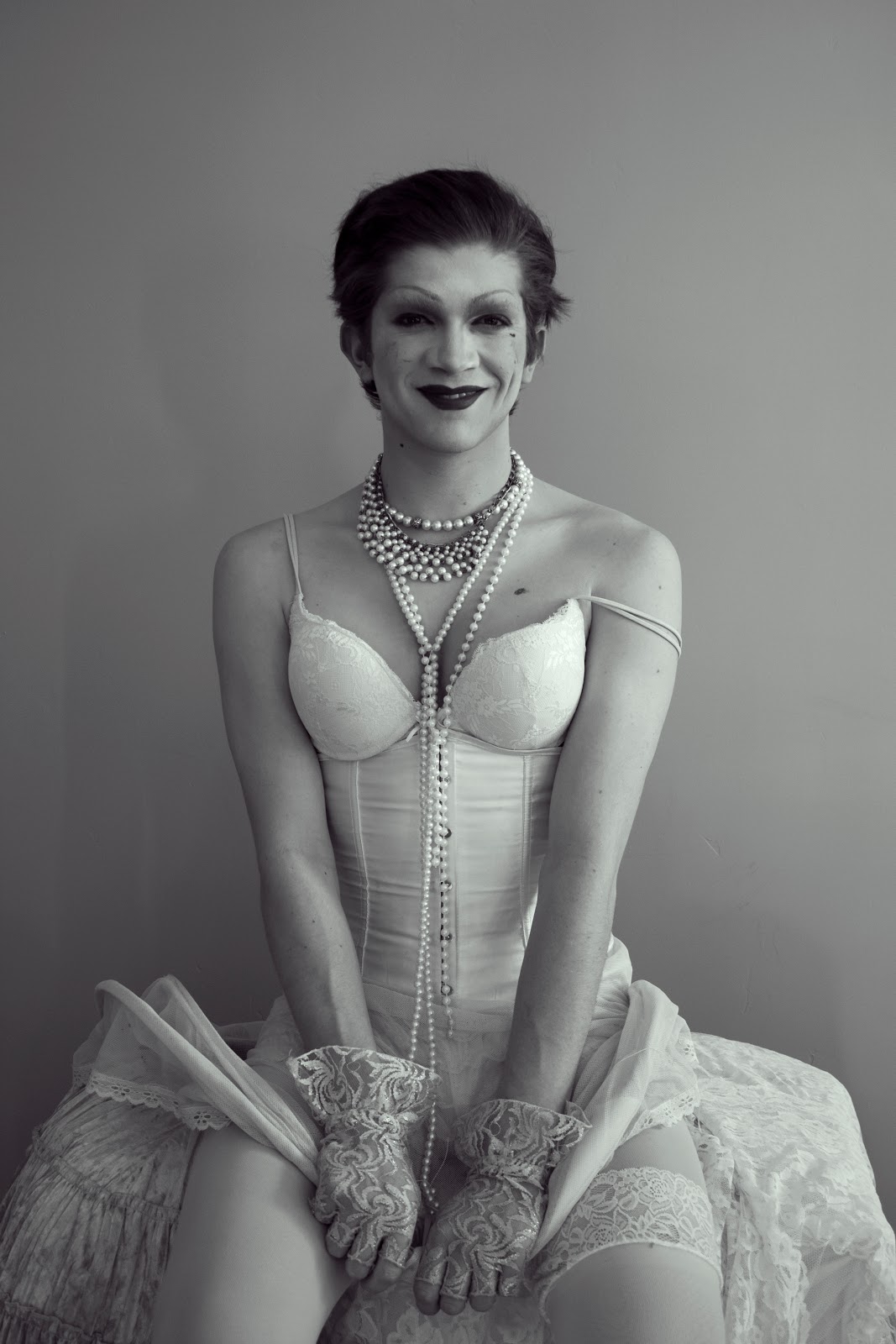 Cabinet of Curiosities I